Extra Chilli – Get to Adjust Volatility by Preferences

Big Time Gaming gives the players ability to make do with good win with up to 117 649 pay lines. It has been updated from every other version as it could help in creating volatility preferences. The drop feature on the arrangement of the slot is good for the recognition of bonuses while playing.

Once you feel ready to take your chances, try LeoVegas Casino – our top choice for playing this slot in May 2021. 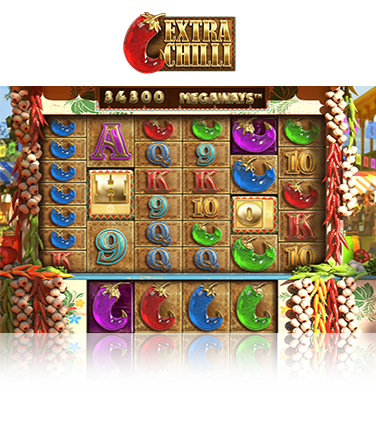 Spin and Expect a Super-Fast Ride

Extra Chilli is a megaways game that is produced by Big Time Gaming. Although it has similar features with the bonanza series from the same producer, it is an upgraded version with unique features. It enables players to activate their bonus without necessarily waiting for the free spin gamble symbol to appear. It has its Mexican miner within the follow-up to the bonanza slots. The players range along with the number of reels. These reels are between 2 and 7, which also corresponds to the megaways that varies with each of the spins.

This game can be played from €0.2 up to €40 per spin. Additionally, the play range has a potential win of 20,000x on each spin. The gold letters form its scatters, which unlock corresponding free spins to make the player access the bonus feature.

The pay lines are the value of each of the symbols. The number is up to 9, depending on the multiplication, which is usually 1x.

The minimum bet is €0.20 and a maximum of €40. One thing to be careful of is to make a successful spin, which could lead up to a free spin bonus. Otherwise, you will lose the extra spin and number of rounds. It does allow multiplication by 1, but it doesn’t permit reversion based on loss.

The winning is done when the dropping symbols are replaced by the new ones on the winning lines until no more winning combination can be achieved. It is vital to pay keen attention to the characters of high valued keys. Generally, purple chillies have the highest (up to 50x the bet), and other Scatter that spells H.O.T give the highest spins.

The scatter symbol is represented by a gold letter symbol spelt H.O.T., and it takes 3 of these anywhere on the play area to trigger the bonus, which starts with eight free spins. Any extra golden H.O.T. symbols will award the player four additional free spins. There are six low paying symbols (A, J, Q, K, 10, and 9) and four high paying symbols, with the purple which has the highest payout. The highest win is 50x of the stake, which is in the purple chilli. Wild and reels are just giving free spins without much earning. Other symbols are red, blue, and green chilli, with a win of 7.5, 2, and 2, respectively.

Unlike many other slots, the Scatter and Wild symbols in Extra Chilli slot do not payout. Instead, they are for substitution and unlocking bonus features.

The game comes with a cascading/tumbling reels feature which Big Time Gaming calls Reaction. When you win paying symbols, they disappear, and new ones replace them, opening up another chance of winning. This continues until there is no more winning combination in the reels.

Extra Chilli slot is also loaded with free gamble spins. Its symbol is a bowl full of chillis. Look out for these symbols as they appear beneath the reels; landing 3 or 4 of this symbol awards you with 4 or 8 extra free spins. You can retrigger the free spins, and a successful win will give you 24 additional free spins.

The slot behaves in a way that each spin will either win or give free spins. The volatility/variance is on the high side. Likewise, Extra Chilli RTP is 96.86%. While playing, one needs to aim for high paying symbols, particularly those whose multiplication will give a high win. If you don’t do that, the loss will rub you off the spins and wins.

Again, note that the numbers you could see have their reels under them. So, it only requires a single rolling down. For instance, the proportions are 1:3, 2:4, etc. up to 9 and ace. As the row vanishes, you could keep track of the movement to know how best to make your spins and wins right.

Extra Chilli online slot is said to be the follow up of Bonanza megaways. Bonanza Megaways from Big Time Gaming has moved up the ranks to become one of the most popular Megaways slots. This game has medium-high volatility with a win up to 10,000x your stake.

Conclusion – Adorned With Bulbs of Garlic and Spicy Chilli

Extra Chilli slot machine is an excellent megaway game with a good feeling and a high spin bonus. The game has quality sound and a great theme. It could be that it is depicting a market place. Still, the accuracy of the chilli and combination of the colour is appealing too.

While playing the games, it is fascinating to know that one could stake and gamble alongside. Also, one could add winning symbols as they are replaced with new ones. As this is going on, one could add more stake for a bonus. That is cool! Although wild and reels are fireworks, they also provide free spins, making them not ‘totally’ bad. It leaves a good memory of chilli and garlic in the market place. If you have played this game, please share your thoughts in the comments.