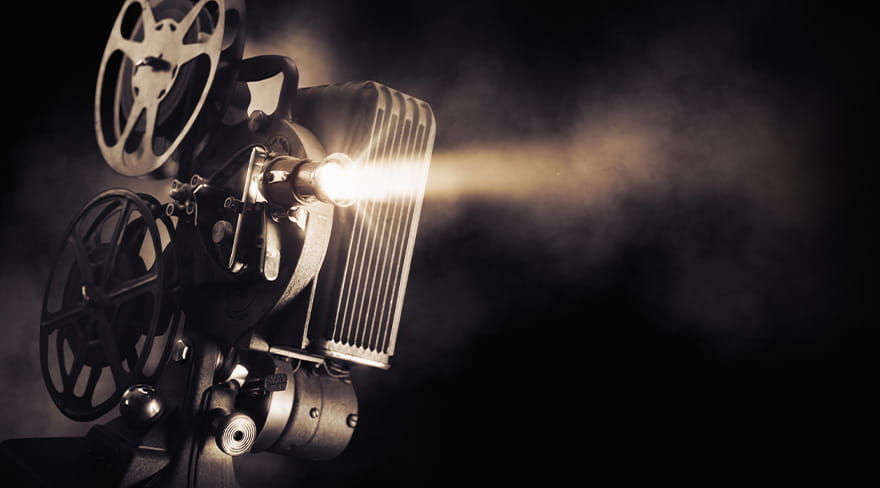 These days, many online casinos offer a lot of slots based on popular movies. This is only possible because of licencing agreements between producers and game developers. In this article, we will present you with the top 10 movie slots that you can find online right now.

Lucky for you, some of these movie slot machines were previously reviewed on our site. So, when anything catches your eye, feel free to follow the link and try the demo version in the corresponding review. In the table below, you will find highlights for each of the top-rated games:

The second instalment of the Terminator franchise, Terminator 2: Judgement Day, tells the story of Sarah Connor and her son John. They are hunted down by the technically advanced T-1000. It was the highest grossing film of 1991 and also of Arnold Schwarzenegger’s career. The movie pushed the boundaries in terms of visual effects and computer-generated imagery. It even won the Oscar for Best Visual Effects. 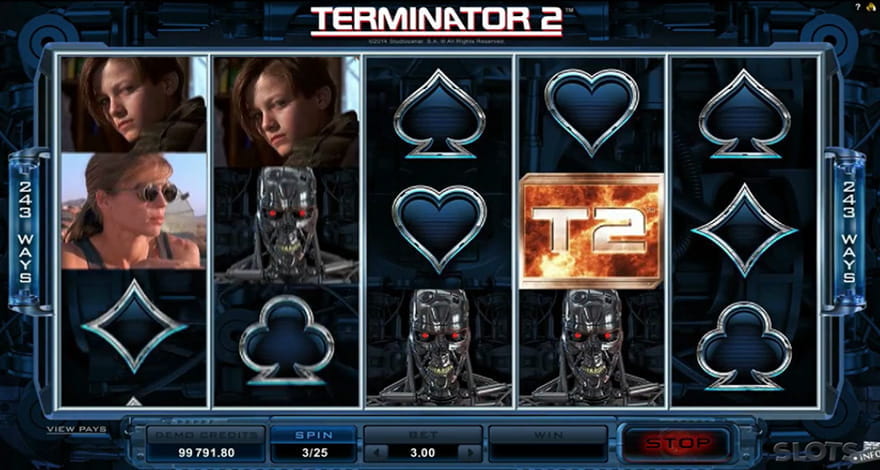 The Terminator 2 movie slot machine captures the very essence of the film, with video clips and characters from the movie. It also includes plenty of exciting and rewarding features that reflect the film perfectly. There are free spins, where the number of paylines increases to a massive 1024 ways to win, with transforming character symbols. Plus, the randomly triggered T-800 Vision mode targets character symbols and rewards bonus win amounts.

Man of Steel is part of Playtech’s DC Super Heroes Jackpot series. The game is based on the 2013 box-office smash superhero film, which rebooted the Superman film series and retold the original story of the famous Kryptonian. The game boasts detailed, colourful and eye-catching graphics, along with intense music. You will see key characters from the movie in the game, including Henry Cavill’s Superman, along with Martha and Jonathan Kent and Perry White. 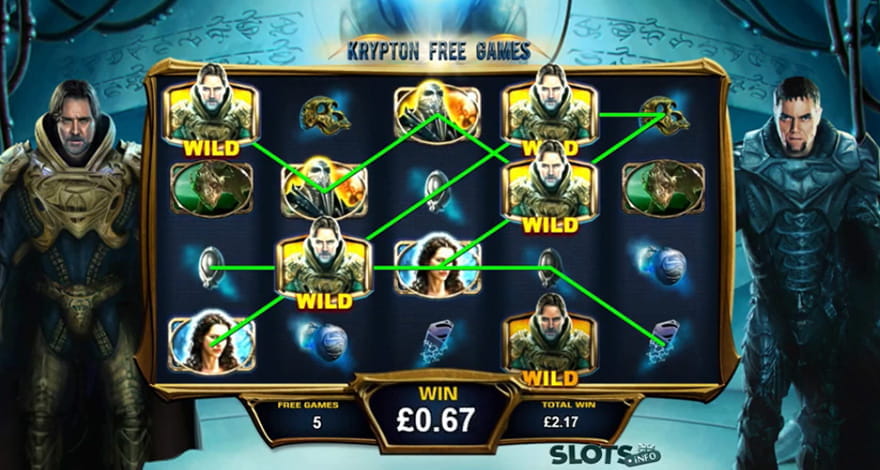 The slot includes a wide variety of special features. These include shifting wilds, Battle for Earth free games, the World Engine bonus, and Krypton free games. The game has 25 paylines, yet during the Krypton free games, this expands to 50 paylines, with higher-paying symbols and up to 10 locked wilds. Plus, any spin can trigger the jackpot game, where you are guaranteed to win one of four mystery progressive jackpots.

3. Planet of the Apes – Most Innovative Slot Design 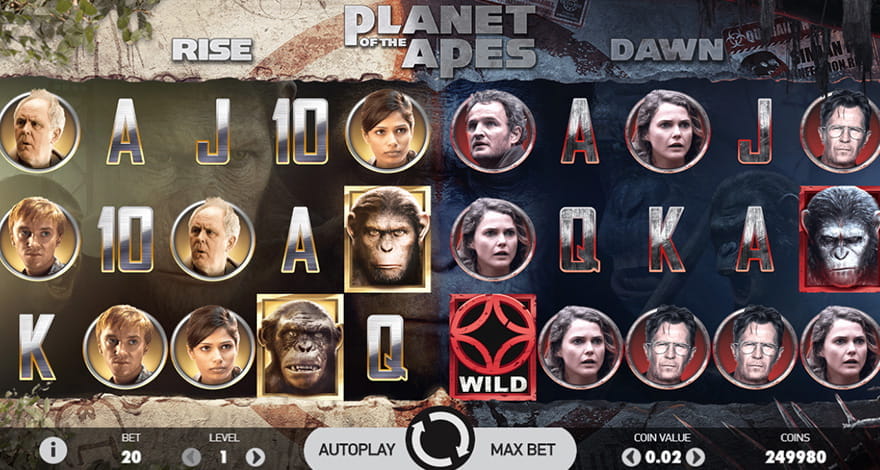 Planet of the Apes consists of two 3×5 slots which sit side by side. Each corresponds to the respective film and features characters from that it. Each play area has its free spins and bonus features. The game also boasts the Dual feature as well as a Stacked Wild feature, which impacts both play areas. The moment you launch this movie slot machine, you will experience a thrilling, action-packed intro video with plenty of authentic footage from the movies, which draws you right into the action.

Moving forward in our top 10 movie slots list, we have Ted, based on Seth Rogan’s comedy. Grab your thunder buddy and prepare for a thoroughly entertaining experience when you play the game. Created by Blueprint Gaming, Ted is a video slot with 5 reels and 20 paylines. Based on the story of the real-life, foul-mouthed teddy bear, the game is jam-packed full of special features, which reflect the theme and make for engaging gameplay. 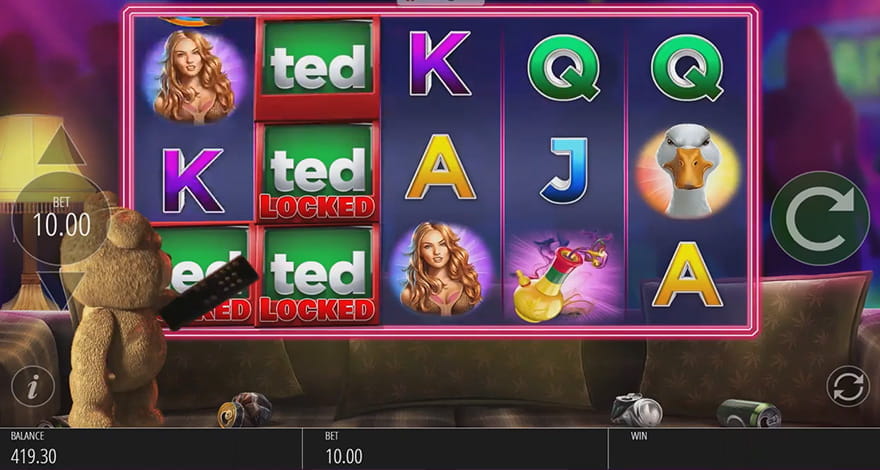 You will see Ted sleeping in front of the reels as you play. If he wakes up, he will randomly activate one of six modifiers, including Lazer Gun Infectious Wilds and the Psychedelic Bonus Boost. The game also includes the Thunder Buddies bonus. Move up the ladder to win one of five bonuses, such as Ted Free Spins and The Big Money Bonus. With so many exciting and innovative features, there is never a dull moment when you play Ted.

Halloween is a relatively new addition to the Microgaming slots selection. It is based on the 1978 slasher film directed by John Carpenter and starring Jamie Lee Curtis in her film debut. The film centres around Michael Myers and his murderous spree. The Halloween online slot creates a spooky and scary atmosphere, thanks to the eerie soundtrack and the authentically themed special features. You will even see the masked Myers lurking in the background as you spin the reels. 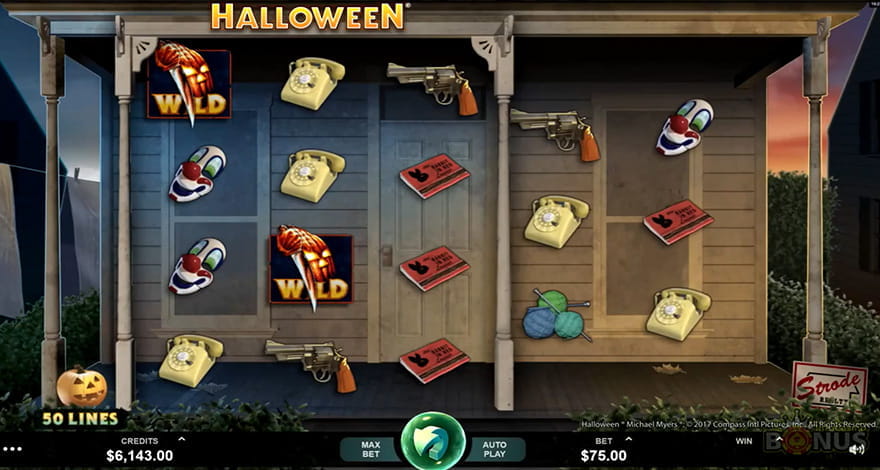 The game includes the Trick or Treat Wheel bonus, where you can win cash prizes up to 10x your total bet until you trigger free spins or the Boogeyman bonus. You will also find the innovative Wandering Reels feature in this slot. These are groups of 3 reels that spin together and can contain jumbo blocks. Be warned, this spooktacular slot is not for the faint-hearted!

There have been many adaptations of the classic tale of King Kong. King Kong movie slot machine is based on the 2005 remake of the classic 1933 film. Thanks to licencing agreements with Universal Studios, Playtech has been able to create a truly outstanding game, which features high impact video clips of the movie along with all the main characters. 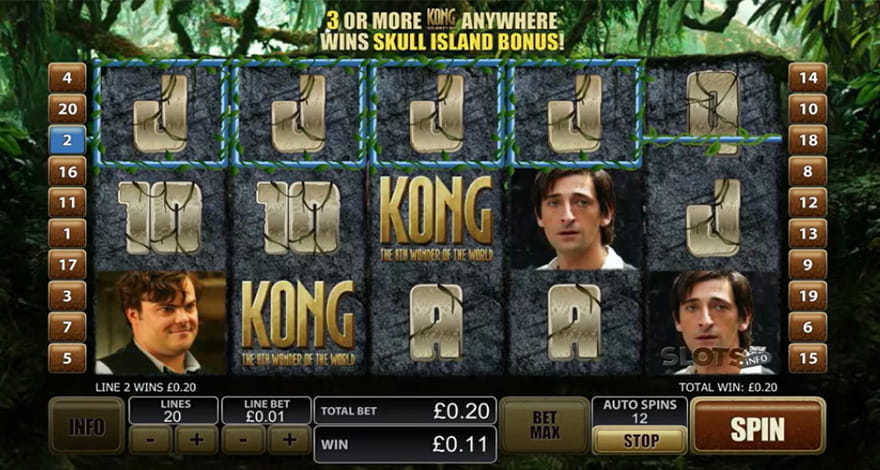 The slot has a unique appeal, with 2 different game modes. Starting in Jungle Mode, the reels are set against rich, deep forests. It features Wild Jungle Respins, as well as the pick and win Skull Island bonus. On the other hand, Big City Mode is set against the bright lights of New York City and boasts its special features, including Wild Kong Respins and the City Tower bonus.

7. Gladiator Jackpot – Based on the Oscar-Winning Movie

Playing Maximus in the film Gladiator made Russell Crowe a household name. His character is a Roman general whose family was killed by the emperor’s corrupt son. Then, he goes to Rome to seek his revenge. The movie was a huge hit and picked up an impressive five Oscars. Having said all that, we had to include this game in our 2021 movie slot machines ranking. Playtech‘s adaptation has 5 reels and 25 paylines. 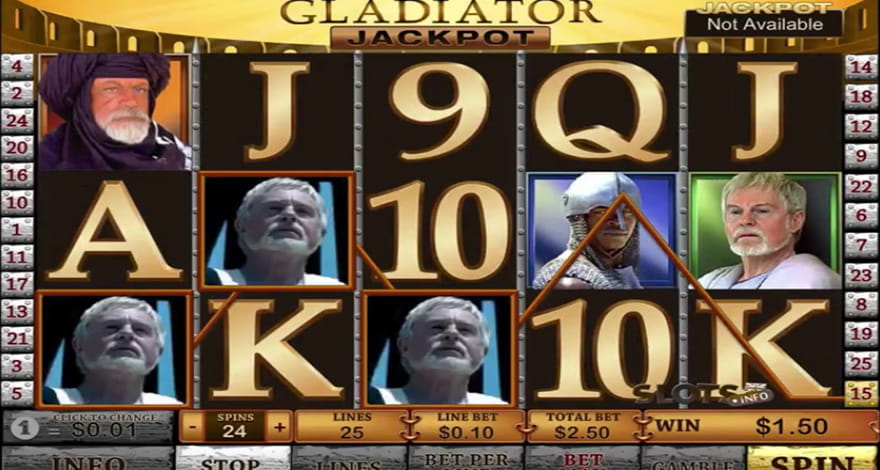 You will see some of the lead characters from the movie, including Commodus, Lucilla, Gracchus, Juba and Proximo. There are also authentic sound effects and even clips from the original film, really solidifying the connection between the movie and the slot. Gladiator Jackpot features the Coliseum Bonus, where you pick to reveal free spins, multipliers, plus extra scatters and wilds. Reveal nine gold helmets, and you’ll pocket a jaw-dropping progressive jackpot prize.

Steven Spielberg’s Jurassic Park made a real impact upon its release. It’s engaging storyline, likeable characters and outstanding graphics and stunts saw it win a plethora of prestigious awards. Furthermore, it started a franchise which continues to thrive. Relive the excitement and thrill of being at the dinosaur island, with Microgaming’s Jurassic Park movie slot. The graphical quality of the game is second to none, with Parallax scrolling effects used to create a truly immersive playing experience. 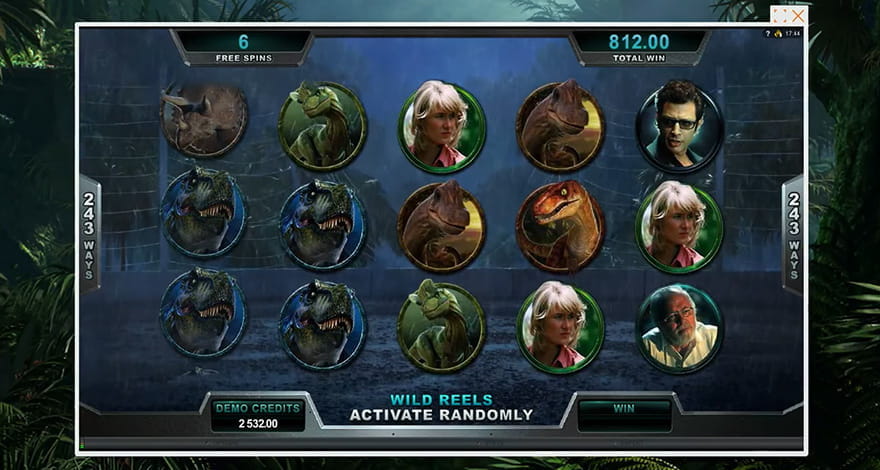 Jurassic Park boasts a 5-round free spin feature, based on different dinosaurs. Each has its own special features, including running wilds and mystery multipliers. The game’s logo is wild and appears stacked on the reels. Look out for the randomly triggered T-Rex Alert feature, which adds up to 35 extra wilds into the reels for 6 spins, for a shot at stacking up big wins.

The 80’s movie Top Gun is a classic of our time, with fast-paced action and outstanding aerial stunts, along with plenty of humour and a timeless soundtrack. The official licenced Playtech slot brings the cult classic screaming into the 21st century, with slick graphics and exciting features. You’ll see key characters from the movie captured in the symbols, including Iceman, Charlie, Jester, Stinger and Goose. Tom Cruise’s Maverick is missing, however, no doubt due to image rights of the diminutive superstar. 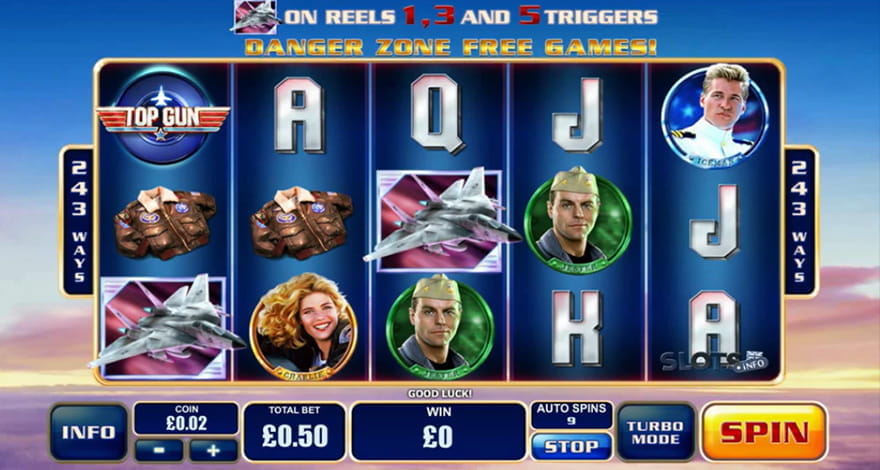 You will hear the iconic Take My Breath Away as you spin the reels, giving a real authentic edge to the theme. Dogfight Wilds are a key feature of the game, as your wingman flies in to add extra wilds, with between 1 and 15 wilds possible on any spin. Danger Zone Free Games are another highlight of the slot, which feature enhanced Dogfight Wilds. Try out the Top Gun slot and experience the thrill as you ride into the danger zone.

Grab your dancing shoes and get ready to relive one of the greatest love stories of all time with this Playtech slot. The Dirty Dancing movie slot features the lead characters Jonny, Baby and Penny, along with plenty of other authentic imagery, all set against a glittery pink background. The game boasts 3 randomly triggered mystery features. The Whirling Wilds feature sees Baby and Jonny dance across the reels, adding up to 6 random wilds in any position. 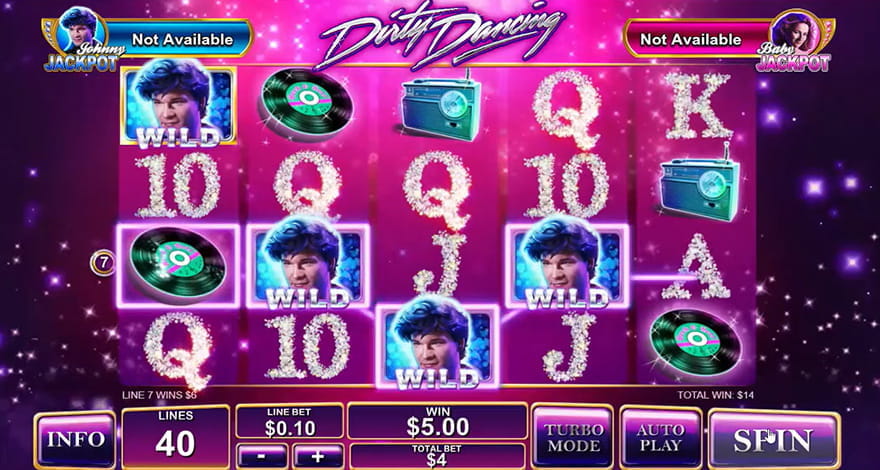 The Dirty Dancing bonus is a pick and win feature; progress through all six stages of the bonus to activate the jackpot game. In Mambo free games, you get to spin the bonus wheel to earn added modifiers, including extra free spins, win multipliers and dancing wilds. If Dirty Dancing is one of your all-time favourite movies, you should not miss out on this game.

With the ever-growing popularity of movie slots, it is no surprise that the number of players’ questions have risen. Therefore, we decided to provide you with answers to the most popular queries. We hope that this would help you choose the slot that suits your needs best.

🎰 What movie slot machines can I play?

More and more players lean towards the popular genre of movie slot machines. You can find an online game based on pretty much every famous film. So, we have decided to rank the top 10 movie slots that you can play online, feel free to check them out.

Nowadays, having a bonus feature is far away from enough, so software developers found innovative ways to appeal to players. We want to see unique in-play options available and one game that really hit the mark is Jurassic Park. Enjoy five different spins options, many wilds, and a mystery multiplier.

The top movie slot machine for 2021 is Terminator 2, based on the 90s film with the same name. Transport to a distant dystopia and save the world with Arnold Schwarzenegger's famous character. This game offers astonishing 243 paylines and great in-play features.

💃 Which is the top movie slot based on a romantic film?

Hollywood is world-famous for moviemaking and among the insanely popular genres is romance. Without a doubt, one of the most popular stories told is that of Jonny and Baby. Playtech developed the Dirty Dancing movie slot machine based on the 80s film with the same name. We highly recommend all hopeless romantics to try it.

✈️ Which is the best of Superman movie slots?

Without a doubt, Superman is one of the most popular superheros of all time. The famous Kryptonian is beloved by kids and adults alike. You will probably find just as many slots as there are movies featuring the hero. In our opinion, the top Superman slot for 2021 is Man of Steel.