Harness the power of the elements to expand your wallet and soothe your soul in this oriental-themed arcade slot from Genesis Gaming. Fans of Chinese mythology will truly be in their element here. Give it a whirl with the free play demo below.

You might want to consider playing for real money, which you can do at Videoslots Casino, top casino for January 2021. 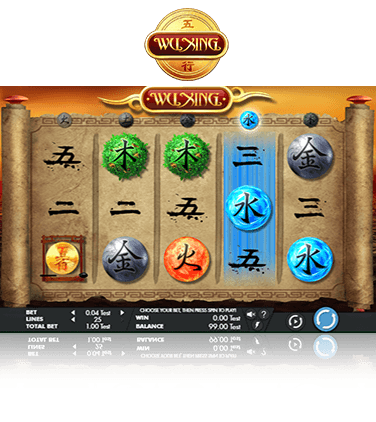 Real Money Casinos Where You Can Play Wu Xing

Before a parched, barren, apocalyptic landscape rests an opulent scroll that withstood the test of time to lend itself as the five-columned, three-rowed frame for elemental balls of fury that will ultimately decide your fate. The balls of fury in question are symbols representing the five traditional Chinese elements of fire, water, wood, metal and earth. Wu Xing actually translates as the five elements, and it’s a term used to describe interactions and relationships between phenomena. Well, this game gives you the chance to reshape these elements and turn water into hard cash.

Trigger the bonus round by getting three gongs, which act as scatters. It unleashes a tumultuous torrent of ten free spins, but not before you have chosen one of the five elements to transform into another, affording some mammoth wins. Water into metal, fire into earth, metal into wood – you have harnessed immense power, so use it wisely. If one of each element falls into the five columns, you’ll unlock the Wu Xing feature, in which you’ll select an elemental power ball to use in an interactive battle showdown. Representing you will be an evil-looking bearded guy, who will fire the elemental ball you chose in the direction of an even more evil-looking bearded guy, who in turn will reciprocate the elemental ball throwing antics until they collide, and one will be determined victor. If your elemental ball and evil-looking bearded guy win, get ready for a mountain of moolah.

This game also features wilds, which disguise themselves as yin yang symbols and they substitute for all symbols, except scatters. Meanwhile the elemental symbols will pay out up to 400 times your wager if you manage to get five on a payline. Consequently, they are mightily rare. The traditional Chinese characters one to five make up the remaining symbols.

Conclusion – Harness the Power of the Elements to Succeed

Even though Wu Xing isn’t one of the best on the market, it’s good fun for a few hours. The return to player rate is lower than many a budding slot at 95.11%, but the original bonus features keep things interesting. Stop treading water – fire it up, run with the wind and test your mettle. There’s no room for a wood reference in there, but you get the point – give it a go and let us know what you think in the form below!