If you’re in search of a game that offers more than your average slot, you’re in luck! This exceptional release from IGT sets new industry standards with stunning graphics, great bonus features, and a captivating level-up plot. Try it for free in the demo version below!

Want to play this Nordic adventure for real money? Then visit Grosvenor Casino where you will find great promotions for January 2021. 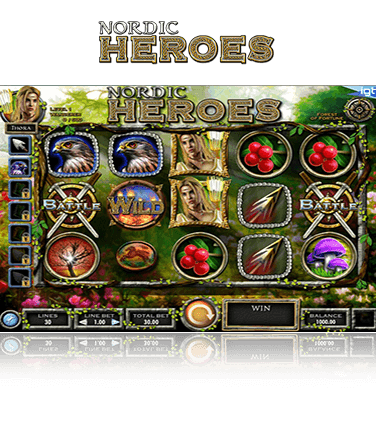 Immerse Yourself in Thrilling Quests

Nordic Heroes stands out from other slots with its level-up structure and fascinating story that sends you on a quest spanning three realms. In this role-playing adventure you start off as Thora – an elf skilled in archery. Your mission – defeat wild beasts, level up, and unlock new quests. You need XP points to climb the level ladder and the only way to gain them is to trigger the Battle Bonus by landing 3 Battle bonus symbols on reels 1, 3 and 5. If you defeat the 3 monsters, additional Victory Spins will be triggered. As you progress up the levels, you unlock the next character – Ragnar and enter new realms. Ragnar is unlocked when Thora reaches level three and the Sea of Glory is accessible at level 5. There are eight experience levels in total, with the symbols on the reels slightly changing and new abilities to fight the monsters unlocked. The higher the level, the bigger the payback you get.

The Various Symbols and Payouts

See the Fascinating Quest in our Video Preview!

Conclusion – A Slot That Has It All

With a great story featuring heroic battles, awesome graphics, and an empowering soundtrack, Nordic Heroes is highly recommended to all of you willing to step up your slot game. It will appeal to all players with a wide range of bets, plenty of bonuses, and an RTP reaching 96,3%. Don’t be put off by the level-up structure and the 25-page payout table – IGT have done a great job putting everything together so that it’s clear and intriguing enough to keep you interested and entertained. They give you all the features of a fascinating interactive game with the role-playing, upgrade of characters’ abilities, and monster battles. And since it’s a slot game and you’re here for the rewards, you won’t be disappointed in that aspect, either. Fighting sea monsters and wild beasts or banking in some serious winnings – this thrilling experience will give you both!