The battle for winnings has begun between the Autobots and Decepticons – who will emerge victorious? Find out as they fight for bonuses and big payouts while Transforming Wilds increase your chances to win. Play for free below to jump in!

Want to upgrade and play for real money? Check out Grosvenor Casino, our top pick for September 2021. 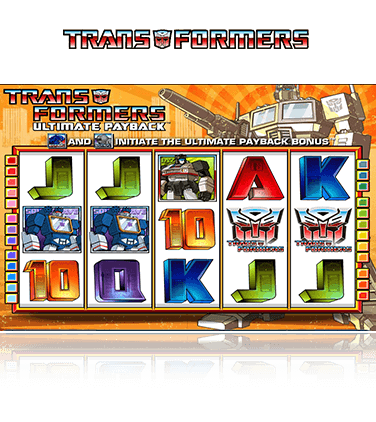 The Rules and Features at a Glance

IGT has come out all guns blazing with this popular franchise Video Slot consisting of 5 reels, 3 rows, and 25 selectable paylines. There are three Wild symbols in the game: The Autobot and Decepticon Wilds appear on reels 2 and 4 only and expand to make the entire reel wild. This occurs when a winning combination is possible. The Cybertron Wild comes up on reel 3 and expands horizontally when used as part of a winning outcome on a wagered line. Three symbols are shown and you’re asked to choose one to reveal the Cybertron Wild multiplier, which ranges from 2x to 10x. Transformers Ultimate Payback also features the Ultimate Payback Bonus, triggered when the Optimus Prime and Megatron Bonus symbols both land anywhere on the 1st and 5th reels. You’ll be able to choose a winner out of the two as they battle amongst free spins. The free games will continue up until 100 or until a Transformer has won the battle. The fight is won when a Transformer looses all 3 Power Units they begin with, ending the run of free spins in the process. On top of free game wins with bigger chances of Wilds, you earn extra credits every time your chosen Transformer damages it’s adversary. There are also rewards for winning the battle, keeping all of your Power Units and a consolation prize if your free spins bare no winnings.

Details about Symbols and Payouts

Check out all the Action here

Take the action up a notch in the machine world with Transformers Battle for Cybertron. Compelling bonus features will have you entertained, such as the FreeFall Symbols that keep you winning again and again. Several payouts become possible at the cost of 1 spin, where the number of free-falling symbols is endless. There’s also a collection of Mystery Features that pit the Autobots against the Decepticons right before your very eyes. A better visual and aural experience awaits you in this slot, too!

This slot will definitely appeal to the old school fans of the comic and TV series, where Autobots and Decepticons are seen in their various transforming variations. The graphics have a very retro feel, so while they’re not the highest quality around, they’re still colourful enough to leave you feeling nostalgic for TV reruns. The soundtrack will tickle those same nostalgic thoughts. The special features of the game are incredibly fun – watching the machines fight it out on the reels is entertaining, while having it happen during your free spins is quite the trick to pull out of the hat. Big payouts aren’t incredibly common, but the smaller ones are. However, if you’ve scored yourself a big win in Transformers Ultimate Payback, we’d love to hear from you in the comments.