Even if not exactly Jurassic Park image and sound quality, this slot will definitely make you go back in time, whether to prehistoric times or to your childhood when flashy images were the hit. Still, it has its charm so go check it out and play for free in our demo preview.

Play the game for real money at Guts Casino – where the exciting promotions in March 2021 are safe from becoming extinct. 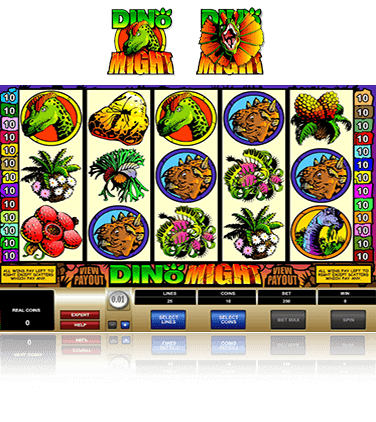 Go Back in Time with This Pre-Historic Slot

The symbols are of course prehistoric giant reptiles, and there’s also some vegetation supposedly from the period, donning the reels. Now, we already said Dino Might is not exactly Stephen Spielberg quality, but don’t expect scientific accuracy, either. There are T-Rex, Triceratops, Brontosaurus, and the like, as well as some plants that are claimed to have been around at the time. The game’s logo is the wild symbol, which substitutes for all regular symbols except the Bonus and Scatter and also doubles all winning combo amounts. Quite thematically, the Scatter is an amber fossil and you will need to line up three of those to trigger the Match Bonus round. There’s another special symbol – again a dinosaur, with the witty name Triggersaurus (slow clap). Get three of those in the bonus round and you will see another screen open up where you have to pick different dinosaurs that will give you different cash prizes.

See the Dinosaurs in Action in Our Game Preview

With its dated graphics, Dino Might is admittedly not the 3D CGI you’re probably making associations with. Instead, it’s more reminiscent of a children’s book or an 80s cartoon and that’s exactly its charm. It’s so clumsy, it’s loveable in a nostalgic (or hipster) way. The beauty of it is exactly its simplicity and straight-forwardness because it is definitely not trying hard to be a competition to the brilliant graphics we’re being spoilt with. You definitely would have considered it pretty rad couple of decades ago, but it’s worth a shot nowadays, too. It will most likely take you back to your childhood and let you get as excited as you want with dinosaur fight bonus rounds and vintage animation and sounds. If you’ve already played the game, we would really love to hear what you thought of it, so go ahead and leave your opinion in the comment section below!