Hellboy – An Outline of the Features

The Dark Horse comic hero comes to life in this release from Microgaming, offering stunning graphics and unique bonus features. Even if you’re not a fan of the comics or films, you can’t miss out on this release. Try it for free in the demo version below!

Got your eyes on some real prizes? Then play the game for real money at Casumo Casino – our top recommendation for May 2021! 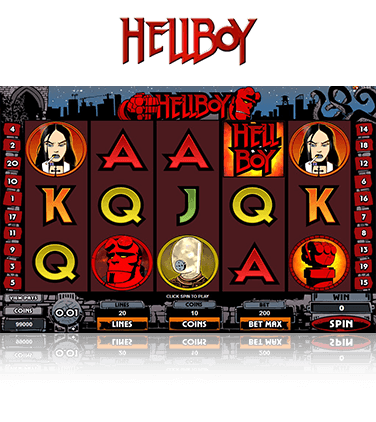 A Hell of a Game – One That Can Be Very Rewarding

Microgaming may not be putting out as many film-themed slots as other providers, but every time they’ve made a collaboration, it’s been a success. Just remember Jurassic Park or Terminator II. This is the case with Hellboy as well – it is based on the character from the Dark Horse comic books that you may recognise better from the Ron Perlman performance in the two films based on the comics. In terms of configuration, this is a pretty standard release with five reels and twenty paylines. What makes it stand out are the wonderful hand-drawn graphics and symbols paying homage to the red-horned protagonist of course, as well as some other main characters like Liz Sherman, Abe Sapien, Johann Kraus, and Professor Broom. The logo of the game pays off the highest fixed jackpot of 10,000 credits and also acts as a wild that doubles the wins of all combinations it completes. It replaces all other symbols except the Scatter – the iconic Hand of Doom which pays both left to right and right to left and activates the bonus game.

Hellboy offers two bonus games and a gamble feature. Supermode is a bonus activated randomly that unlocks ten free spins. During the free games, up to three positions on the reels become and stay wild boosting your chances of higher winnings. Three scatter symbols activate the Underworld bonus game where you have to help the protagonist make his way across four levels of tunnels, battling different creatures in order to reach the Relic of Power, which is where the money is. A blocked tunnel ends the bonus round. Although the free spins round is often activated, the chance for the highest winnings is at the Underworld feature where cash prizes can reach £8,400. The game has an RTP of 97% and offers frequent payouts with chances of really high fixed jackpots. Combined with the visual appeal – stunning graphics and cool animations, it is a pleasure to play. Let us know what you thought of it by posting your opinion in the comment section below.