Pedal Power – Push It To The Limit

Out of all of the possible themes that you could make a slot of, cycling is probably the last one I’d consider to have any appeal to anyone. And yet here I am, reviewing it. Does it hold up at all?

Мake sure to check out 32Red Casino’s offer for January 2021, which will give you a bit of an extra boost to win this race. 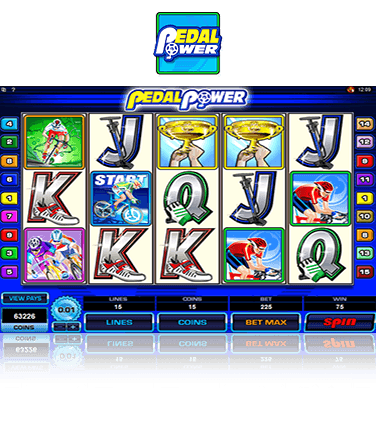 Theme-wise, unfortunately I’d have to say that the slot was dead in the water. Pretty much the only way you could ever save a theme like that is to go completely over the top with it, with cartoony characters riding ridiculous bikes through cartoony situations. Sure, it’d be really dumb, but at least it’d be deliberately dumb, and Microgaming would’ve been in on the joke. But instead they try to play it cool, with these really intense symbols and metallic textures… And I’m just not into it. It’s cycling! You know, the sport where people wearing dorky helmets ride bicycles! It’s not supposed to be cool! Gaming-wise, unfortunately the game is as dull as its visuals. Now, don’t get me wrong – there’s nothing inherently wrong with it at all. It’s a solid slot, all of its features work, and there’s really nothing I could complain about. But at the same time, there’s nothing particularly praiseworthy about it, either. There’s a gamble feature that’s the same as most slots, as well as a free spins slot whose biggest draw is that you’re able to choose whether you want more free spins or less spins, but with a bigger multiplier. But neither of those are unique in any way.

Like I said, there’s absolutely nothing wrong with “Pedal Power”. It’s perfectly adequate in every way. Neither its features nor its visuals are bad. My only problem is that they’re so…uninspired. The thing is, the way I see it, it’s less important for a slot to be actually decent and more important for it to appeal to its players and make them want to play it. I’ve seen slots that are objectively terrible, and yet they have a cool license, or an awesome bonus game, or some sort of hilariously over the top jackpot, or any combination of the above. That’s what attracts people to play them. All it takes is one stand-out feature. And “Pedal Power” doesn’t really have a stand-out feature at all. Its theme is ridiculously boring, its bonus games are unimpressive, it has nothing to offer the world. And honestly, in many ways that’s just as bad as a slot that’s just poorly put together.