Thunderstruck II – All the Important Details at your Fingertips

Thor’s back, and this time, he’s brought the other Norse Gods with him. This game is the sequel to the original Microgaming slot. The highlight is the Hall of Gods bonus game, with tons of features including free spins, multipliers, and Magic Wilds. Play the game for free here.

If you want to play for real money, Casumo Casino is the place to be, and is our top choice for September 2021. 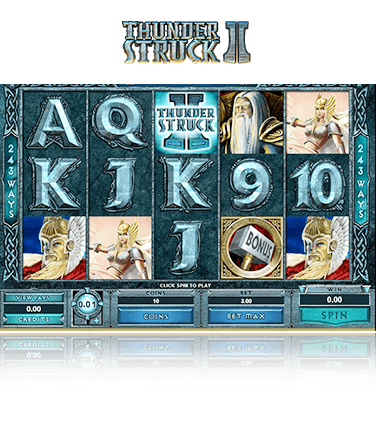 This video slot is based on the theme of Norse Mythology. It has 5 reels, 3 rows, and 243 paylines make this game one of the best Microgaming slots. The Thunderstruck II logo is the Wild symbol. As well as providing the highest payout value, it also substitutes for other symbols, doubling the win. The game includes the Wildstorm feature. This is triggered randomly, and can turn up to 5 reels Wild. The main attraction of the game is the Great Hall of Spins Bonus round. Get 3 or more Hammer Scatter symbols anywhere on the reels and entry to the hall is granted. There are 4 different levels to this bonus game, which become available once the bonus feature has been triggered a certain number of times. Starting with Valkyrie, you earn 15 free spins with a 5x multiplier. Loki awards 20 free spins, with the Wild Magic feature, which transforms multiple symbols into Wilds. Next up, Odin supplies 20 free spins, plus the Wild Raven feature, which provides various multipliers, up to 6x. Finally, Thor grants 25 free spins with rolling reels. Consecutive wins increase the multiplier up to 5x.

Video Preview of the Game in Play

As already mentioned, this game is a sequel to Thunderstruck. The original is incredibly simplified compared to it’s follow up, both in terms of graphics and features. The original game has just 9 paylines. It features a free spin bonus round, where 15 spins are granted and all wins are tripled. In the first game, you have the option to gamble any wins, providing a chance to double or quadruple your payout multiple times, by correctly guessing the card colour or suit.

Conclusion – Exciting Game with Many Features

The Norse Mythology theme is expertly conveyed with the various symbols. As well as the 4 different Gods, there are also symbols of Thor’s hammer, Viking longships and the fictional realm of Asgard. The quality of the graphics is exceptional, and the dramatic orchestral background music adds to the authenticity of the theme. As well as being visually stunning, the variety of features is also outstanding. With a Wild symbol that doubles payouts and the Wildstorm feature which can turn all reels wild, the base game provides plenty of opportunities to win. Plus, the multi level bonus round is exciting and lucrative, with more and more rewards when you re-trigger the feature. All in all, this is a highly entertaining game, with tons of features and a high payout rate. Have you played Thunderstruck II? You can use the comments form below to add your own thoughts and experiences.