Microgaming’s “Untamed” series doesn’t quite have the reputation it deserves. Sure, ‘animals’ is a hugely overdone topic when it comes to slots, but that doesn’t mean the games themselves don’t come with a bunch of awesome features!

Want to play for real money? Make a bet at Casumo Casino – top recommendation for January 2021. 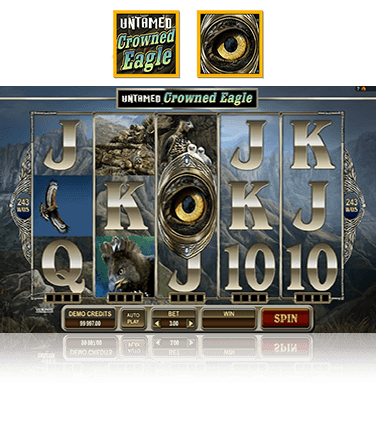 Much like the other slots in the series, this one isn’t exactly a looker, with most of the symbols consisting of letters and images of, what else, eagles, which are pretty, but won’t exactly blow your mind, and the lack of animation during winnings doesn’t help. With that said, the 243 paylines more than make up for the uninspired visuals. The real appeal of the slot, however, comes from its numerous bonus games. The gamble feature, which is a staple of the series, makes a return here and allows you to bet your winnings with odds determined by you alone. In addition, you also get 10 free spins if you collect 3 or more Scatters, which is less than its contemporaries, but to make up for it you are given up to 10x multiplier per spin.

This slot, much like the others in the “Untamed” series, is a fantastic hidden gem that shouldn’t be overlooked no matter what. If you can get past the fact that the visuals aren’t that spectacular, even by animal slot standards, you’ll encounter a game with what I believe is the best gamble feature in slots, a fantastic free spins bonus and a few very welcome surprises along the way. This slot truly soars above the rest, and passing it up just because of its theme should be ill-eagle!