Join Hansel and Gretel on an enchanting journey through the woods in this amazing video slot by NetEnt. The game has many features and bonuses and it gives you the chance to win on any three successive symbols on a payline. Try the demo below.

Or go straight to Grand Ivy and start playing for wins with their bonus for January 2021! 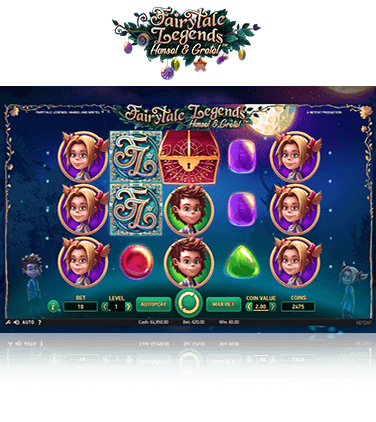 The Rules and Features of This Fairytale Adventure

Fairytale Legends: Hansel & Gretel is a 5-reel, 3-row video slot with 10 fixed paylines. As the title suggests, it has a fairytale theme, more precisely – the Hansel and Gretel story, which was popularised by the Brothers Grimm. The higher paying symbols are the Fairytale logo, Hansel, and Gretel. The lower paying symbols look like the precious stones the siblings took home at the end of the fairytale but they are, in fact, pieces of hard candy in four colours – red, yellow, green, and purple. The Wild is the path on which the siblings drop bread crumbs and can appear as a Stacked Wild on reels 2 and 4 in the base game. Lines pay left to right as long as there are at least three symbols in succession on a payline and they don’t need to start from the leftmost reel. But even if you don’t win, you could trigger one of the three random features – Fairy Wonder Spin, Fairy Surprise, and Fairy Wild Spin. In the first one, 5 to 9 logo symbols will appear anywhere on the reels for one spin. In the second one, a symbol is selected and copied onto all the lower paying symbols for that round. In the third feature, two Stacked Wild symbols can appear on all reels except reel 3. Moreover, after one spin, you’ll be awarded with a Stacked Wild Re-Spin. There’s also a bonus feature, triggered by three Bonus symbols appearing on reels 1, 3, and 5. When that happens, one of three bonus games will start. The first one is the Candy House Bonus, in which you’ll have the chance to pick three pieces of candy, each with a hidden multiplier. The second one is the Free Spins feature, in which you’ll get 10 extra spins. The third and final bonus game – Coin Win – awards the player with a win of their current bet multiplied by x15.

See a Preview of the Game

Fairytale Legends: Hansel & Gretel is a great addition to the NetEnt fairytale series of slot machines. It bears some resemblance to Fairytale Legends: Red Riding Hood in the random features, the logo symbol and the general feel of the game. It also features the same musical theme. However, this game has one considerable advantage – you’ll get a payout for three symbols in a row as long as they appear on one of the 10 paylines. This means that the three or more symbols don’t need to start from the leftmost reel. Now, hurry up and start playing and winning prizes before NetEnt realise they’ve increased your chance of winning too much.

up to £1,500 + 100 Spins on StarburstOur casino suggestion for Fairytale Legends Hansel and Gretel
Overall Rating 9.7/10.0 Play here!
Full T&Cs apply. 18+. New players only. One bonus offer per player. Minimum deposit £20, max bonus bet is £5, bonus spins on selected games only and must be used within 72 hours. Bonus funds must be used within 30 days otherwise any unused bonus shall be removed. Bonus funds are 100% match up to £300 on your 1st deposit, 25% match up to £800 on your 2nd deposit, and 50% match up to £400 on your 3rd deposit. Bonus funds are separate to cash funds and are subject to 35x wagering the total bonus, cash & bonus spins. www.begambleaware.org.
NetEntAll 188 NetEnt slots at a glance
Popular Blog Posts
PlaytechAll 189 Playtech slots at a glance
MicrogamingAll 408 Microgaming slots at a glance
Home > Netent > Fairytale Legends: Hansel & Gretel