Fortune Rangers: A Low Volatility Slot with a High RTP

NetEnt’s new 2020 venture has caught the eye of online gaming enthusiasts across Asia. Dragons and warriors await anyone who logs in to venture into the intrigues of the game. The desktop and mobile compatible game plays out across five unevenly-sized reels and offers gamers up to 800 times their stake on each spin.

Ready to take your chance? Stake as little as £0.20 and stand a chance of winning Try Grand Ivy – our top choice for playing this slot in January 2021. 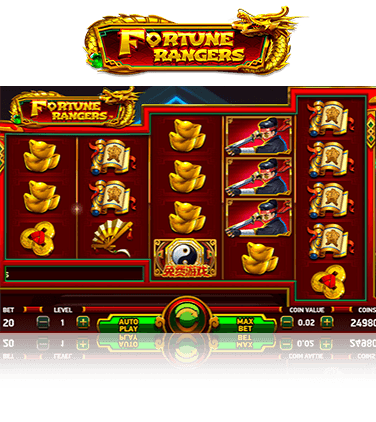 The video slot features a classic oriental style with vibrant colors and exotic images that make it hard-to-resist for both developers and players alike. Bright red and gold are the colors that dominate throughout the game. The graphics are reasonably realistic and symbols such as lucky coins, fans, scrolls, and classic icons on the reals are other features that make the game a delight. The male and female warrior character designs are inspired by a definite Manga-style and martial arts.

Fortune Rangers is supported on both PC (iOS, Windows) and Android mobile devices. The game has a slightly unorthodox 5 reel layout (3-3-4-4-5) but once you start to play it is very easy to follow. You play with 20 coins for a minimum of 0.20 per spin. Wagers can top out at 200.00 by raising their coin value and bet level.

The Male Warrior ranger of fortune is the highest paying symbol followed by the female warrior. The Lucky coin which is represented by the traditional Chinese gold bullion and medalions is categorized as a mid-paying symbol. The scroll and the fan are the lowest paying symbols in the game.

A majestic golden dragon and the Ying Yang icon are wild and scatter symbols respectively. The wild symbol appears randomly during the gameplay. All the 5 reels can turn into wild and this will lead to massive payouts. One can earn up to 800 times their stake, the highest possible win is 160,000.

Up to 16 free spins can be unlocked in Fortune Rangers. Landing 3, 4, or 5 scatters triggers 8, 12, or 16 spins respectively. This in turn activates another unique feature, the bonus round. During the bonus round, the reels link together.

The bonus round does not affect the final reel and thus gives players the chance to secure more paylines. More paylines increase the chances of earning more money.

The Lucky Wilds reel feature is another feature that appears randomly during gameplay. This unique twist substitutes all symbols in a reel for the golden dragon. All of the 5 reels can turn into wilds and this will lead to handsome payouts.

Fortune Rangers is available on mobile. Its user interface has been expertly adapted to fit the mobile screen. In the mobile version, the spin wheel disappears from view when the reels are spinning. Settings and options are filed in a seperate submenu.

The easy to use and navigate user interface makes the mobile version nearly, if not equally, appealing as the desktop version. The economical and clever use of space keeps the display clutter free without sacrificing the game’s functionality. All the options found on the desktop version are available on the mobile version and this ensures that none of the entertainment is sacrificed.

The mobile version is compatible with both Android and iOS. As long as a phone is running on an updated software, be it Android or iOS, the game plays seamlessly on virtually any smartphone or tablet.

As mentioned earlier, NetEnt’s Kung Fu themed game is a 5 reel low variance video slot with 76 paylines. The slot’s RTP of 96.90% means that a player can earn up to 800 times their stake. Stake amount ranges from 0.2 to 200. The free spins, linked reels and lucky wilds features enhance the chances of players to earn more winnings.

The highest paying symbols are the male and female warrior characters and they are the key to winning more money from stakes. The male ranger in particular, is the most rewarding and with 5 reels in combination a player earns 10 times their stake. The game’s low volatility is a feature that elicits mixed feelings among players, but thanks to it players can enjoy the slot without a substantial risk.

Conclusion: Kung Fu with a Twist

NetEnt’s video slot promises a Kung Fu filled adventure. Despite the slightly unorthodox and uneven reels, it is a straightfoward game that wont challenge a lot of players. The easy to use mobile interface and the fantastic game graphics on both desktop and mobile make the game an easy sell.

The varied features: free spins, linked reels, and lucky wilds make the journey to the east worthwhile by enhancing the chances of players to earn more cash. A free version exists where players can test their skills before diving into the real deal where they stand a chance of making up to 800 times their stake.

The video slot became the second release for the Asian market in 2020. Its gameplay and features just go to show the lengths through which NetEnt has gone to deliver to and impress the gaming community in the far east. It is a decent release but it lacks the cutting edge that timeless classics from industry leading developers have been portraying since time in memorial. As a result, it will only cater to casual players who don’t want to take any risks. The slot is promising to be a hit on the Asian market but only time will tell of its fate on the global stage.

Share your experience with the video slot in the comments section.

up to £1,500 + 100 Spins on StarburstOur casino suggestion for Fortune Rangers
Overall Rating 9.7/10.0 Play here!
Full T&Cs apply. 18+. New players only. One bonus offer per player. Minimum deposit £20, max bonus bet is £5, bonus spins on selected games only and must be used within 72 hours. Bonus funds must be used within 30 days otherwise any unused bonus shall be removed. Bonus funds are 100% match up to £300 on your 1st deposit, 25% match up to £800 on your 2nd deposit, and 50% match up to £400 on your 3rd deposit. Bonus funds are separate to cash funds and are subject to 35x wagering the total bonus, cash & bonus spins. www.begambleaware.org.
NetEntAll 188 NetEnt slots at a glance
Popular Blog Posts
PlaytechAll 189 Playtech slots at a glance
BetsoftAll 15 Betsoft slots at a glance
Home > Netent > Fortune Rangers