The Phantom’s Curse – Review at the Opera

This is another entry to the renowned Universal Monsters series by industry leaders NetEnt. Their trademark style shows in all aspects of the game, with nostalgic graphics and unconventional bonuses. You can play the game for free in our demo below.

You can try this game for real money at Grand Ivy, our recommended operator for October 2021. 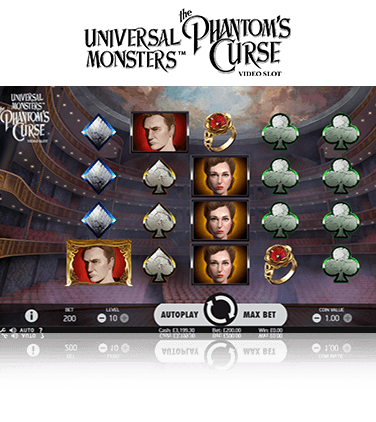 The Phantom’s Curse offers 40 fixed lines that pay both ways. As you would expect, all the symbols are associated with the story of the Phantom, with the titular character and his beloved Christine offering the highest payouts. The Phantom’s Mask acts as a Wild, while the Chandelier is a Scatter symbol. If the Scatter lands in reels 1,3 and 5, it triggers a Free Spin sequence. During the free spins, the chandelier will appear next to the slot, tied with a rope to each of the 5 reels. Whenever a Masked Phantom symbol appears in a reel, he cuts the corresponding rope, thus lowering the chandelier. When all ropes are cut, the chandelier falls, and the free-spin round ends. The special stacked symbols in reels 1 and 5 also offer game bonuses. If the Stacked Phantom and the Stacked Mask land fully in their respective reels, a Masked Phantom re-spin is initiated, during which the stacked symbols become wilds and remain in place. The Phantom and Christine, meanwhile, trigger the special Pick and Click bonus game. In the first round of the bonus game, you get to pick flowers among 8 roses hiding either coin rewards or blocker symbols. When a blocker symbol is drawn, you move on to the second round, where you choose one of three mirrors, and this determines the multiplier for your prize.

A Full Video Preview of the Game

The other online game that tackles the same theme is Phantom of the Opera from NetEnt’s competitors Microgaming. The Microgaming title is quite different in nature, as it features branded images from the 2004 movie. It is a strong offering, with interactive bonus rounds that give NetEnt a run for their money. Ultimately, the choice between the two games comes down to preference: the nostalgic art of NetEnt versus the more serious approach by Microgaming.

The Phantom’s Curse currently stands as the latest instalment in the Universal Monsters series, and on its own, it is a very fine game. However, NetEnt have raised the bar during the last few years, so the final verdict is: it could be better. The art is fine, the payouts are decent, and the fact that paylines go both ways is a definite plus that can’t be overlooked. However, there have definitely been better games by NetEnt in the past. All to all, the abundance of bonuses seems to be the biggest saving grace here. Do you agree with this opinion? Comment below!

up to £1,500 + 100 Spins on StarburstOur casino suggestion for The Phantoms Curse
Overall Rating 9.7/10.0 Play here!
Full T&Cs apply. 18+. New players only. One bonus offer per player. Minimum deposit £20, max bonus bet is £5, bonus spins on selected games only and must be used within 72 hours. Bonus funds must be used within 30 days otherwise any unused bonus shall be removed. Bonus funds are 100% match up to £300 on your 1st deposit, 25% match up to £800 on your 2nd deposit, and 50% match up to £400 on your 3rd deposit. Bonus funds are separate to cash funds and are subject to 35x wagering the total bonus, cash & bonus spins. www.begambleaware.org.
NetEntAll 189 NetEnt slots at a glance
Popular Blog Posts
PlaytechAll 189 Playtech slots at a glance
NextGenAll 111 NextGen slots at a glance
Home > Netent > The Phantom's Curse