The slot is yet another feature-rich product from NetEnt exploring an enchanted garden full of colorful flowers, bugs, and beautiful fairies on a 5 reel display. 20 paylines and a host of engaging bonus features are just but some of the other enticing features of the highly revered slot. A wild symbol in the base game and special free spin rounds with progressive win multipliers are also prominent features of the slot.

Want to earn real money? Win up to 400 times your stake with Grand Ivy – our top choice for playing this slot in January 2021. 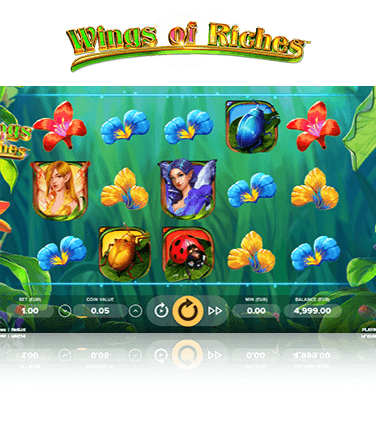 NetEnt’s Wings of Riches is a magic-themed video slot that immerses you in an enchanted world filled with colorful flowers and magical creatures. The slot features 5 reels with 3 rows and boasts of 20 pay lines. A host of engaging bonus features are also prominent within the game. The base game comes with a spreading wild symbol and a special free spins round where wilds and progressive win multipliers are awarded.

The bet range is between 0.2 and 400 credits and you stand a chance of wining up to 400 times your stake. The magical-themed slot has an RTP of 96.63% and it is considered a medium volatility slot.

The dandelion is the wild symbol and can appear initially on reels 2,3, and 4. It substitutes all the symbols except the scatter and in the process triggers the spreading wilds feature where wilds spread across the reels transforming nearby symbols to dandelions.

The dragonfly symbol is the scatter. When three or more scatters appear on a base game the free spins feature is activated and 10 free spins are awarded. Every spin guarantees a wild symbol. The slot also features a multiplier symbol that only lands on reel 5 and each time the multiplier lands it increases by 1 up to 5x.

The slot comes with a wide range of betting limits to cater for all players. The minimum stake is 0.20 credits and the maximum is 400 credits per spin or 0.01 to 20.00 on each of the 20 fixed pay lines. A win is granted by landing matching symbols across a line on adjacent reels starting from the left. The slot features standard control options namely autoplay and turbo modes which are designed for easy use and navigation of the game.

The slot’s bonus features such as the spreading wilds boosts the odds of claiming big wins. The dragonfly scatter symbol in three or more places at once awards ten free spins. A multiplier symbol on reel five doubles wins on its first appearance, then tripples them, and so on, up to a multiplier of 5.

Dandelion flowers are the slots wild symbols and they appear on the three central reels only, as mentioned earlier. Once they land, they spread and turn the adjacent 2-4 nearby symbols into wilds as well. The purple dragonfly, on the other hand, is the scatter symbol and when 3 of them appear during the base game, they trigger 10 free spins. During the free spins game, a multiplier symbol appears only on the 5th reel like an ascending ladder of dropping flower bulbs. Each time the multiplier symbol lands, it increases the multiplier up to a maximum of 5x. The highest possible win from a single spin is around 400x the stake.

The slot’s user interface has been expertly crafted and customized to fit mobile phone and tablet screens. The spin wheel disappears from view when the reels are spining and the same applies for settings and options which are filed away in a separate submenu. NetEnt’s clever and economical use of space keeps the slot’s display clutter free without sacrificing the game’s functionality. All the options that can be found in the desktop version are in the mobile version. The mobile version is compatible with both Android and iOS and so long as a device is running on an updated operating system the game runs seamlesly on any smartphone or tablet.

This 5 reel magical-themed feature-rich slot is a medium variance slot with a solid and above average RTP of 96.63%. The medium variance rating means that small to medium payouts are more common than large ones and this suits players that prefer regular wins to build their casino bankroll gradually.

Despite the lack of a jackpot feature, it is still possible to earn winnings of up to 400x your stake per spin. Hiting anything close to that a few times will surely make you feel like you have hit the jackpot. The multiplier feature of up to 5x also boosts your odds of landing bigger wins.

Conclusion – Wandering with the Fairies

Magical-themed slots are quite popular but NetEnt offers a high-quality example of what such slots are all about. The mystic creatures and seamless graphics give the slot a much-needed edge. It is a theme that can only be loved or ignored, no in-between. The slot’s bonus modes also make the game a sight for sore eyes. NetEnt’s innovation in making a user friendly mobile version cannot go without notice. Wings of Riches is a worthwhile journey of wandering with fairies in a mystical garden that deserves all the attention that it has, and continues to receive, to-date.

Kindly share your experience with the slot in the comments section.

up to £1,500 + 100 Spins on StarburstOur casino suggestion for Wings Of Riches
Overall Rating 9.7/10.0 Play here!
Full T&Cs apply. 18+. New players only. One bonus offer per player. Minimum deposit £20, max bonus bet is £5, bonus spins on selected games only and must be used within 72 hours. Bonus funds must be used within 30 days otherwise any unused bonus shall be removed. Bonus funds are 100% match up to £300 on your 1st deposit, 25% match up to £800 on your 2nd deposit, and 50% match up to £400 on your 3rd deposit. Bonus funds are separate to cash funds and are subject to 35x wagering the total bonus, cash & bonus spins. www.begambleaware.org.
NetEntAll 188 NetEnt slots at a glance
Popular Blog Posts
iSoftBetAll 45 iSoftBet slots at a glance
BetsoftAll 15 Betsoft slots at a glance
Home > Netent > Wings of Riches