Cloud Quest – RP-Gee That Was Confusing

Take to the skies in Play’n GO’s Role-Playing Game (RPG) themed slot. The moment you enter this game, you’ll see that it is only few pen strokes away from a Final Fantasy VII lawsuit. However, there is a reason Final Fantasy is one of the most successful game franchises of all time and this developer sought to capitalize on the craze. Like most RPGs, the first playthrough can be overwhelming due to the game’s many features and playing options. This slot is no different. Try a free demo below.

If you found the game experience rewarding, play for real money at BetVictor, the top casino for January 2021. 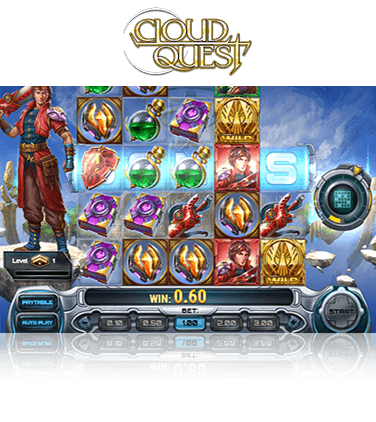 Let us start by saying that this slot is overwhelming. Cloud Quest has five reels, five rows, and no fixed paylines. If you line up three of the same symbols in any direction, you win. When we first approach a complicated slot, we usually turn to the paytable/rules. This time, it wasn’t much help. The game’s paytable is eight pages long, and tries, in vain, to explain the game’s 11 symbols, its superpower meter, its five-stage monster hunting bonus game, and the three characters you can level up to reach the level of Titan, (we didn’t play long enough to know what that awards). Sometimes our playthroughs can help clear up a complicated paytable, but not this time. The game features three heroes who stand to the left of the slot. The game rotates between the heroes for indeterminable reasons. We’ll try to explain some of the game’s features, but to completely understand the game, it will require some play on your part.

The game has two meters to fill. The first is the level up meter, the second is the superpower meter. The superpower meter is filled by power stones that appear on a winning line. If you fill the meter, you gain one of five powers that award either multipliers, spins, scatters or wilds. When any three symbols create a winning combo, the middle symbol is transformed into a wild, and the reels collapse for more chances at winning. The bonus is unlocked by collapsing the reels so that the word bonus can be read in the background. In the bonus game, you choose one of the three RPG characters to fight a total of five different monsters in five separate stages. During the game, the characters level up meter fills up. Anyone who has played World of Warcraft knows just how addictive levelling up can be, so we don’t know if we can advise that you spend, what we can only assume is a colossal amount of money, just to level up in this game. Those are the basics of Play’n GO’s game.

Conclusion – So Many Features, So Little Time

Play’n GOs attempt at an RPG themed slot is a monumental endeavour. Like all RPGs, Cloud Quest has a steep learning curve. It will take some time to discover all of the features in this game, but once you’ve learned the ins and outs, the slot can give players a multi-layered experience perfect for fans who find themselves unenthused by the typical video slot. However, we think it may be better just to play a video game, which will still reward you for the time you spend grinding but will cost a whole lot less money. The game features an RTP rate of 96.52%, and some of the most beautifully drawn characters in any slot we have seen. They wouldn’t seem out of place in one of the world’s top RPGs. Did you find the game experience rewarding? Share your opinion in the comment section below.