Wizard of Gems – The Inside Information

With a moderately creepy “yeah” from the white-bearded title character, you’re welcomed to a fairly standard slot design developed by Play’n GO. He watches, occasionally scratching himself with his magic wand while waiting for you to hit that spin button, checking his spell book ever so often as if he’s bored by your very presence. See if you can wake him up in our free demo game below.

If you managed to make some magic, you can play for real money at BetVictor, the top casino for January 2021. 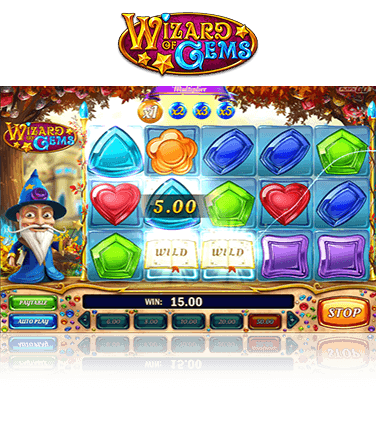 Magic captures our imagination across so many different types of media, making names like Gandalf and Dumbledore famous, and inscribing their visage on our memories from childhood. Not only books and movies, but slot developers like Play’n GO also try to capture a bit of the magic in games like Wizard of Gems. The adorable titular character with his familiar long white beard and pointed hat rules over a simple five-reel, three-row grid. It’s chock full of shiny jewels that can make winning combinations from left to right over 20 paylines. Every time a new treasure trove of symbols drops into the grid and a match is found, the multiplier increases slightly, growing until it could multiply your wins by five. It resets when a non-winning grid appears, though. Matching two, three, four or five symbols prompts a reassuring nod from the magical man and creating a shower of sparks spurting from the end of his wand. Two or more winning combinations in a row bring on a triumphant cheer. He becomes even more animated when you trigger the free spins by matching three star scatter symbols anywhere in the grid. That’s when the blue-robed sorcerer takes it upon himself to zap random symbols with his magical powers during non-winning free spins, replacing them with Wild symbols. He bloody loves it, a sly grin clearly visible under his glorious moustache. The ethereal, chiming soundtrack of the slot really takes it up a notch during the free spins. The tempo increases and the bass kicks in, emphasised by the magician’s cries of pleasure at your fortune.

Designing an online slot game that doesn’t specifically appeal to children is apparently a pretty fine line. Play’n GO using animated fantasy characters like magicians and bright, gaudy graphics certainly doesn’t scream ‘adult game’, but at least it doesn’t push things too far in the other direction like the slots with buxom ladies as mascots. Altogether, we think Wizard of Gems is fun, cute and has a high RTP of 96.5% so if you’re over 18, have a go and let us know your thoughts in the comments section below.