Batman & Catwoman – A Summary of the Essential Details

Popular as one of the most stylish and sleek thieves in the superhero world, Catwoman has a leading role alongside Batman in this amazing video slot by Playtech. The game puts forward a bonus and free games round as well as the 4 DC Jackpots. Spin the reels for free here!

Thinking about playing for real money? Make a bet at Casino.com – top recommendation for July 2021. 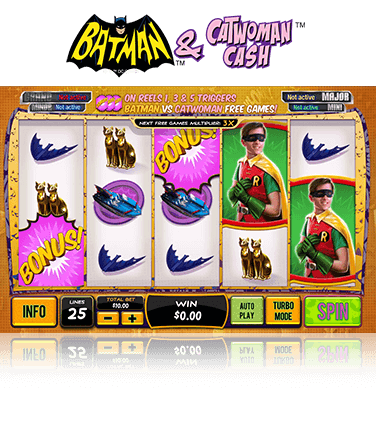 Rules and Features at a Glance

Batman & Catwoman is a Playtech video slot with 5 reels, 3 rows, and 25 playlines. The main payout symbols feature the three key figures: Robin, Batman, and Catwoman plus some of their main belongings as a mask and a whip, the utility belt, a helicopter and the batboat. The Batman logo stands for Wild and it serves as a substitute for all other symbols except Scatter. Any spin, even the non-winning ones, can award you with an entry to the Jackpot game and a sure win of one of the 4 DC progressive jackpots. The Scatter symbol can show up on reels 1, 3, and 5 and three of it on these reels start the free games round while two of it on reels 1 and 3 let you win some cash or increasing multipliers in the car burglar bonus feature.

Watch this Video to See the Game in Play Mode

Other variants of this slot

If you wonder why the Joker isn’t featured in this DC Superhero tribute, it is because you can enjoy his outlaw behaviour in a separate Batman & The Joker Jewels video slot. Based as well on the 1960s Batman TV series, it has a similar vibe, jazzy soundtrack, the same 4 DC progressive Jackpots, and different type of entertainment treats like the creepy random wild feature, infinite free spins and a bat-tastic multiplier meter.

As part of the DC Superhero slot collection, this game provides big wins, increasing multipliers and the greatly portrayed love/hate relationship between Batman and his cat thief friend. The graphics have the same feel as the whole series and allow high-quality playing experience. On the background, you can hear a playful funky soundtrack which adds value to the ultimate theme. Bets start at £0.25 and go up to £625 and the x5 Batman Logo will win you x2500 on your current line bet. All features are easy to trigger and grant you some speed cash in your balance. Have you already played Batman & Catwoman slot? We would love to learn what you think of it in the comments section below.