Fireworks Slot – A Five-Reel Slot with a Twist

Realistic Games has come up with a gem-laden set of reels featuring a bonus that launches a firework high into the sky when you match three of the same symbol on each of the five reels. Why not give the free play version a look?

You might want to give it a spin for real money, which you can do at Grosvenor Casino, the number one operator for March 2020. 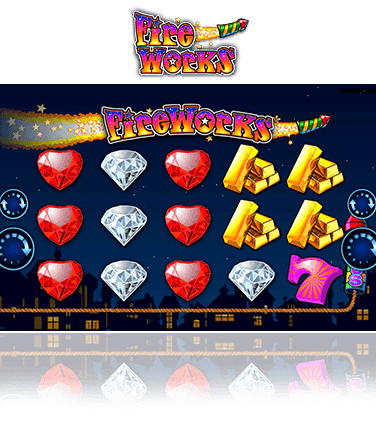 Real Money Casinos Where You Can Play Fireworks

This game is available on all major smartphones as well as a desktop version. Each spin can be commenced at a cost of 20p at its lowest ebb, and £100 at its peak. The graphics are fairly mundane, and it’s hardly going to light up the night sky, despite depicting exactly such a scene when you trigger the bonus animation. The fuse running along the bottom of the reels is lit, and the giant bonus firework launches upward and unleashes a scene of pleasant destruction. The background consists of a row of houses and said night sky. Everything is clear and easy to understand due to the very basic gameplay mechanics.

There are some slot machines we could write a book about, but this isn’t one of them. Given the fact that the controls are as complicated as a windscreen wiper, or the fact that the flash animation could have been programmed by a monkey with a typewriter, the name of this slot can be considered somewhat misleading. Expect no fireworks in this basic game, except for the gigantic cartoon one that sits in the corner of the screen, teasing you with every failed spin of the reels. Despite its flaws, this game is perfectly suited to the casual player who is happy to automate the spins while venturing off to make a cup of coffee. Give the Fireworks slot a go to see for yourself and let us know what you think in the comment box below.