Developer Betsoft avoided paying the big bucks for an Indiana Jones licence and instead opted to copy it ever so subtly. Featuring bonus rounds, free spins, respins and wilds, this animated 3D slot will keep you in awe. Try it out below for free!

If this game floated your boat, why not play for real money? It is possible at Kaboo Casino, the top operator for January 2021 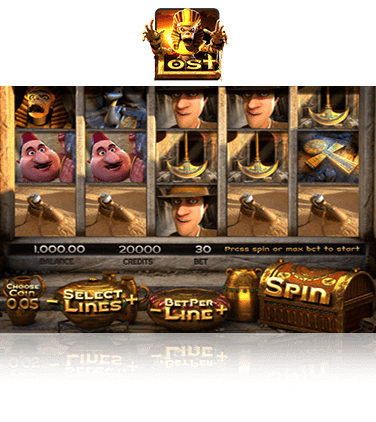 Real Money Casinos Where You Can Play Lost

Lost features all the classic stereotype characters from the Egyptian mythology, action-adventure genre. Symbols include our hero, who didn’t require a name for the purpose of this simple game, but Betsoft plumped for the catchy Dr Dakota Bones. He could be Harrison Ford’s son, sporting hand-me-down attire that has seen a mummy or two in its time. Speaking of mummies, a mummy symbol shares the honour of best-paying icon alongside the protagonist – both pay 500 coins with five on a payline. Other symbols include the familiar fez-wearing fat man, an opulent, swinging axe, a vaguely dog-like creature, an ankh and a scarab beetle. The thirty paylines pay from left to right.

There’s a staff symbol that acts as a wild. If it lands on the central reel, the icon expands to take up the entire reel, serving as a 2x wild reel for all symbols except the bonus and Monkey Click Me triggers. On that note, the Monkey Click Me game is activated by getting a monkey symbol anywhere on reel four. This crazy critter will jump around as you click on symbols to reveal prizes until the Collect sign appears. In addition, this game has a respin function, which triggers every time you get a winning combination on the reels. After your prize is paid out, the central reel is automatically respun for a chance at more dosh. If you win again, the multiplier in the top right increases up to a maximum of 5x and continues granting multiplied winnings until your luck dries out. There’s also a Mummy’s Tomb Bonus that gives you the chance to get some big wins by helping the Relic Hunter choose the right door to escape terrifying mummies.

Video Preview: Get Lost in the Action

Lost is not a game you’ll be bookmarking any time soon, but it has its thrills and spills, and the respin feature is a generous inclusion. If you are someone who has watched The Mummy seventeen times, you’re still not going to be overwhelmed by this 30 payline effort. The aforementioned paylines are selectable, which brings versatility to the wagers, and allows you to play faster than a swinging axe or slower than a scarab beetle. The graphics are neat and tidy and the animations smooth, but it’s not enough to get you spreading the word on Facebook or shouting from the rooftops. And, if the cheeky monkey doesn’t get your goat, give this game a go. If you do indulge, let us know your thoughts using the box below!