7th Heaven – Doesn’t Know What it Wants to Be

In what could have been a test project for interns, this arcade-style slot will leave its mark on you like a good book doesn’t. Betsoft left many stones unturned in the production of this game, but don’t let that put you off – see it all with the demo below.

If you enjoyed it and want to play for real money, that’s possible at Dunder Casino, the number one casino for May 2021. 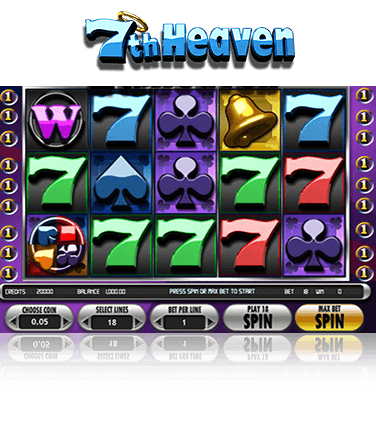 Real Money Casinos Where You Can Play 7th Heaven

Featuring graphics as crisp as soggy bread and sound effects as endearing as a child with a vuvuzela, 7th Heaven didn’t make it into online casinos for its presentation. It does, though, feature 18 paylines and an expanding wild feature, which sets it apart from numerous slots that dare to call themselves “classic”. Wagers vary from 1p to £1, with coin denominations of one to five across the varying number of paylines. That versatility comes in handy, and it must be said that when it comes to this subject, many slots are about as flexible as a headlock.

As you might expect, symbols include the number seven. Fans of the colours red, blue and green will rejoice – sevens rear their heads in these three hues, with the red one being the most exclusive and rewarding. Getting five of these beauties on a payline is worth a whopping 5,000 coins. Other symbols are indicative of a rift at the heart of the Betsoft decision-making machine. Traditional symbols like bells, cherries and bars made the cut, but other fruits or even rubber duckies are thrown brutally by the way side and substituted for playing card symbols. However, there is another reason for the card symbols’ inclusion: like the Planeteers in Captain Planet, all four playing card symbols come together and merge their mighty power into one, forming a formidable bonus symbol. Notch up this icon on reels two, three and four, and a colour wheel appears, which will automatically grant you between seven and twelve free spins. Each free spin includes a bonus suit, which pays out equal to your initial bet when it appears. There’s one more thing: this game also features gems. Seven different colours, no less. A Gem Party icon on reels one, two and three triggers the Gem Party bonus game, which gets you seven free spins using the special gem symbol reels.

The bonus features in this game are enough to keep you awake, but for those who demand a bit more from their time playing slots these days, 7th Heaven is about as vital as a nail bar. And, it’s not an exaggeration to say that its saving grace could be the mute button. But even if you employ your own sounds while you play, it’s not enough to hide the monotony of staring at a screen as grainy as a field of wheat. It’s a shame because Betsoft has concocted some great slot games until now. If you took the plunge and want to share your thoughts on your experience, use the contact form below to do just that.