This 3D slot from Betsoft is deceptively named. A young couple and their dog are forced to ask for help after their car breaks down, and the only building around is the aforementioned one, which is home to some decidedly oddball characters. Below you’ll see a demo version where you can play for free!

Take it to the next level and play for real money, which is possible at BGO, the number one casino for October 2021. 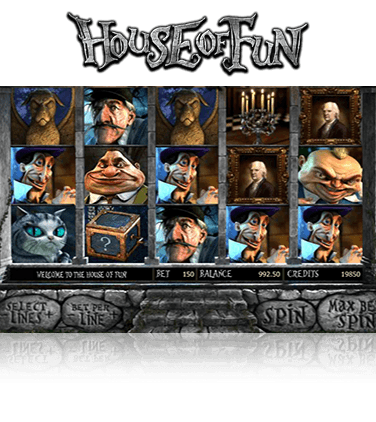 Real Money Casinos Where You Can Play House of Fun

From the moment the unsuspecting couple rock up at the ghoulish gates and encounter a gravedigger with a voice like an ailing, chain-smoking lead singer from a brutal death metal band after a world tour, who warns them to ‘beware the House of Fun’, you know you are in for trouble. And, the nefarious cast of residents is like something out of a low budget Tim Burton movie. There’s a creepy jack-in-the-box that doubles as a devilish door handle, which trebles as the game’s bonus symbol, three of which trigger the Escape Bonus Round. The team at Betsoft were clearly proud of this character because it appears one more time, in an initial state of in-the-box. The box, with a question mark emblazoned on its side, acts as the game’s scatter, which unleashes the Jack Free Spins feature when three or more appear. You will, though, have to endure the terrifying sight of the box exploding open, revealing the malevolent munchkin who springs out the box with such enthusiasm that our poor protagonists resort to cowering with fear. This suit-wearing, devil-horned dwarf demon then takes up the whole centre reel with a creepy, grinding shuffle dance that would get him get kicked out of any nightclub, making the reel wild for the duration of your free spins.

Then you have a wicked Willy Wonka wannabe, whose symbol also triggers a bonus game when three appear on certain paylines. The Mad Click Me bonus grants you a random amount of coins each time you click one of three symbols. The supporting cast features an evil cat; a sadistic, fully-grown man-baby; some candles, statues, paintings and mirrors; and a fat man who swallows a fish. The man-baby and fat fish-eater are the big-hitters, gaining you 150 coins if you rack up five on any of the game’s 30 selectable paylines.

Buckle Up for a Video Preview

Conclusion – Don’t Play with the Lights Off

Direct from the chamber of discarded horror movie ideas, House of Fun isn’t quite the antithesis of enjoyment, but its attempts to snare you in its dastardly web are ultimately undone by its annoying characters, largely unenthralling bonus games, and its Playstation 2 graphics. On the other hand, the decent payouts and selectable paylines give it enough legs to run with. Its attempts to inflict fear might work as a barometer for someone with a weak heart and horror movie immaculacy, but by the time you start laughing out loud, the ambience is entirely lost. All being said, there are plenty worse slots on the market, and if you’re intrigued you should give this one a blast. If you do, then let us know what you think about it below!

Frequent Questions About the Online House of Fun Slot Machine

If you’re still not convinced that the House of Fun slot is a great choice for all types of gamblers, maybe the following FAQ section will change your mind. Since we’ve provided detailed answers to all frequent inquiries about this slot, do check them out as they might provide some valuable answers for yourself as well!

Are there any House of Fun free games?

Fortunately for the fans of free spin bonus rounds, the software provider Betsoft has included such a feature in this exciting 3D slot. However, make sure to get familiar with all of the needed House of Fun symbols so you can know how the free spins are triggered!

Is there are top House of Fun slots casino which I can play at?

For those of you who are looking only at the best operators with the most exciting features, we're glad to inform you that there are indeed three House of Fun casinos which you will surely like. Additionally, those operators have appealing welcome offers which you can take advantage of!

Can the House of Fun slots' gameplay be seen with real money?

Having in mind the psychology of certain players, engaging only with a demo version isn't enough in some cases. Therefore, in order to be as most accurate as possible, we've added a House of Fun slot video preview where real play is demonstrated.

Can the House of Fun slot machine be played for free?

Since it's always a good idea to explore a slot risk-free before attempting to play it with real money, Betsoft has been kind enough to provide a House of Fun free demo. The gameplay is the same with the only difference being that the slot is played with virtual money.