This video slot from Genesis Gaming is a night sky full of star signs and constellations, combined with astronomical payouts. Although the vaguely ancient Greek backdrop is slightly confusing, the game itself has got plenty of celestial features to distract you with, including free spins and special wilds. Read on for more and play the game for free in the demo below!

If you’d like to move on to real money play, take a look at Guts Casino – our top gambling pick for March 2021. 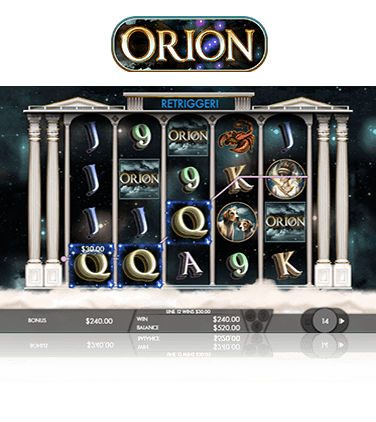 Real Money Casinos Where You Can Play Orion

This slot does an excellent – though somewhat inexplicable – job at mixing themes, where astronomy and ancient Hellenic flair mingle atop a standard video slot setup of five reels and four rows. The symbols allude to the mythology behind the star constellations, with Orion, the hunter, as the titular character alongside the Dog Stars; Canis Major and Canis Minor. The blue Earth symbol serves as a wild, while the game logo is a scatter. Scatters pay out as well, which is nice, and they also trigger eight free spins if you land three or more scatters on a spin. After this, the Free Spin Feature is kicked off, in which additional free spins can be re-triggered. Unfortunately, there’s no multiplier to speak of, but the gameplay comes through with semi-volatile wins – so why any more bells and whistles if the base formula works? Give these (literally) star-studded reels a spin and see for yourself!

Conclusion: Stargazing that Pays Out

This online video slot won’t blow you away with super-advanced graphics, but still delivers an intriguing mix of themes, arranged neatly in a classic format. The animation on the reels is a nice touch, and the Orion’s Free Spins feature adds value on the player side – especially with the re-triggerable free rounds. The music is probably not for everyone – also because roaring guitars have little to do with astronomy, so the musical direction here is a bit curious. Nevertheless, the medium volatility makes up for the inconsistencies in theme, and, overall, provides a pleasant gameplay experience. It’s also an excellent crossover if you’re bored by the repetitive iterations of slots inspired by ancient Greece, since this Genesis Gaming slot successfully steers your gaze in a slightly different direction.