If the Norse Gods were ever to sit down together to brainstorm an epic video slot game, it’s fair to say this ‘fall of Asgard’ themed game would come pretty close to hitting the mark. Developed by Genesis Gaming, the game introduces multi-level spinning which allows you to unlock godly bonus features. Intrigued? Check out the free demo for this slot below or keep reading to find out more.

If the ancient beasts do not intimidate you, why not play for real money at Betway Casino, the top casino for January 2021? 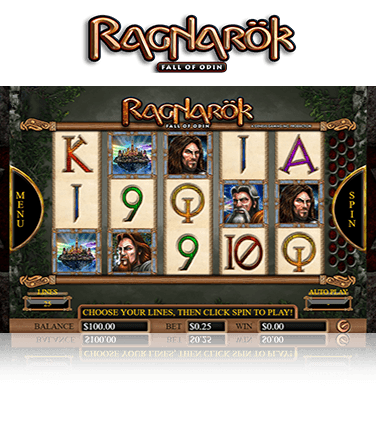 Real Money Casinos where you can Play Ragnarök

The Ragnarök slot game is everything you might expect from a game based on an epic battle between the Norse Gods and the fearsome beasts unleashed by Loki. This game is all about the tiered levels of gameplay that you can unlock the more you play. The scatters and wilds in the form of Runes not only bring large multipliers but are used to enter these bonus rounds. The Level 1 Thor Feature is unlocked by hitting three or more scatters in one spin, giving you an 2x multiplier plus 10 free spins. Collect 15 Rune symbols in total and you will reach Level 2 where you can play the Thor or Freyr Feature. Another hit of three or more scatters and Thor will reward you with 15 free spins and triple your winnings. On the other hand, the Freyr Feature will start a battle with the evil Surtr. You will receive three attacks of which you will get an instant win or a multiplier. Collect 30 Runes and you will have reached Level 3. Match another three scatter symbols and you can choose between the Thor, Freyr and Odin Features. Thor will grant you eight free spins, a 3x multiplier and extra wilds. The Freyr feature will launch you into another battle with Surtr. Should you decide to choose Odin, you will launch into battle with the fabled enemy Fenrir and receive eight free spins, a 3x multiplier and extra wilds.

Choosing to base a slot game on the theme of Ragnarök is a bold choice for any software producer, let alone one of the relatively smaller ones in Genesis Gaming. But the company has absolutely smashed it. The gameplay is fantastic, the graphics are stunning, and the awesome soundtrack really adds to the excitement of the atmosphere. The multilevel gaming aspect really impressed and give the game a longevity that most other slots do not have. Its almost like playing a real video game. If you have played this game before, share your opinion below.