Genesis Gaming has produced a 10-reel arcade slot set in the opulent Luxor Temple in Egypt. It’ll bring out your inner-archaeologist as you seek the riches of an ancient civilisation lost in time. Featuring a rather unique 11-reel free spins bonus round, there’s some “reel” digging to be done. So, you see the free demo version below? Grab a shovel and get involved!

If you had a whale of a time, then for real money play might appeal to you. You can do just that at BetVictor, which is one of the best casinos to play at in January 2021. 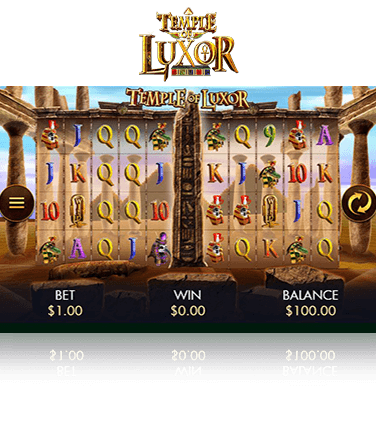 Real Money Casinos Where You Can Play Temple of Luxor

Ten giant, cascading reels streak down from the top of the majestic sandstone structure, parted into two sets of five by an engraved obelisk. The reels are replete with symbols depicting four Egyptian gods, bonuses and wilds, plus the typical fare – ace through to nine. Two or more bonus symbols on both reel sets triggers the free spins round, which transmogrifies the obelisk into an eleventh reel, connecting the two sets and facilitating gargantuan gains. In the bonus game, wins pay both directions.

In normal play, wins pay from left-to-right on the left set and from right-to-left on the right set, with a total of 50 paylines possible. The audio team did a fine job of replicating the traditionally accepted norms for an Egyptian soundscape, and Osiris himself would approve of the way they manage to ramp up the tension for the bonus round. The graphics are crisp and clear, although the historical research team should have informed the artists that the Pyramids of Giza are not located directly behind the Temple of Luxor. However, they do look imposing and profound enough for this author to forgive them this ultimately inconsequential hiccup.

Video Preview: See What the Fuss Is About

If you are yearning to follow in the footsteps of the great explorers, uncover a fantastical mystery shrouded by the sands of time, unseen for thousands of years, and revel in the illustrious grandeur of ornate and lavish structures dedicated to pharaohs and deities, then you have clearly set your hopes too high. This remains an arcade slot game, but it’s a good one. Unless you are playing on your mobile device from the Temple of Luxor itself, you’ll need a strong imagination to picture the scene beside the banks of the river Nile. But, gameplay is fluid and fast, payouts are frequent, and the bonus spins are enjoyable enough to keep you coming back. If you tried it out, we’d love to hear what you think about this game using the box below.