Ever dreamt of playing a slot machine based on a Japanese children’s TV cartoon series featuring pieces of sushi that can walk and talk? Me neither – but that’s exactly what makes this slot so unique. You must be intrigued – so try out its demo below.

You can wing your way over to NetBet Casino to play it for real money – the best casino to play at for July 2021. 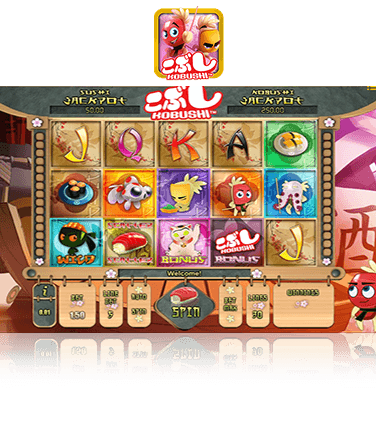 Kobushi means ‘fist’ in Japanese, and developer iSoftBet sure made a good fist of this video slot. Converting a cartoon show into a slot machine must have been challenging to say the least, but it’s an entertaining bundle of fun featuring five reels and 30 paylines. Straight off the bat you are greeted by a hungry, chopstick-wielding cat that is anticipating a feast on the unsuspecting and remarkably over-confident looking pieces of sushi with faces. Delving into the gameplay, you can win two progressive jackpots with stakes from 30p to £3 per spin. Match five of the octopus creatures and you’ll gain 1,000 coins. You’ll want to see a lot of the ninja-like, bandana-wearing pieces of sushi – it’s the game’s wild symbol, which substitutes all except the scatters, awarding up to 1000 coins if you get five in a payline. Meanwhile, the salmon sushi is the standard scatter, offering up to 25x your stake.

Apparently the Kobushi show is quite a hit over in Japan and in mainland Europe, but we had to check out a Youtube video or two to know what on Earth was going on with this surreal scenario. They say that when the cat is away, the mice will play, but in this instance the sushi shop workers and customers are away, and the sushi will play – and so will the cat, apparently. The Kobushi slot features all the main characters from the show. Overall, we had a lot of fun playing – and reviewing this slot. Payouts are reasonable, gameplay is fluid, and we managed to trigger the Big Cat bonus feature on a number of occasions. Right, we’re off to binge-watch Kobushi. Let us know what you think of the game below. Sayonara!