Drone Wars – All the Features in a Glance

Are you ready to stand up for humanity and take on a fleet of unmanned aerial vehicles? This space-themed Microgaming release has an awesome retro arcade game feel and fantastic bonus features for plenty of intergalactic fun and rewards. Try a free version below!

Play this interstellar adventure for real money at Dunder Casino! Try the latest offers they have in store for January 2021! 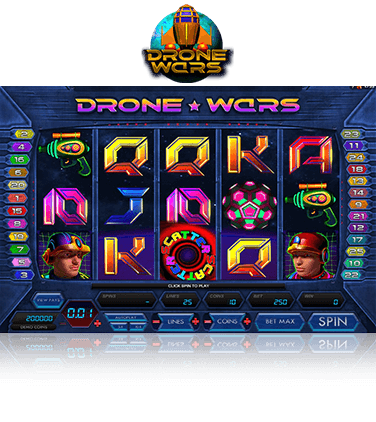 The Space Theme and Symbols in Detail

No, it’s not the CIA and MI6 fighting over who gets the first shot of your morning exercise. We’ve talked about conspiracy theories, remember? Now, to the point – Drone Wars is a 5-reel, 25-payline slot that could be used by English teachers to exemplify the concept of future in the past. Yes, it is a sci-fi game but instead of cutting-edge graphics and animations, it’s a vapid representation of what maybe mid-20th century science fiction authors imagined the next millennium would look like. As a result, you have futuristic looking reels with a retro vibe that all hardcore fans will enjoy, as it harks back to the old movies and games inspired by the genre. Symbols include a pink glowing spaceship which is the wild and the highest paying icon, as well as drones, rockets, laser guns, and pilots. The lower-value symbols are the standard A to 10 styled to resemble the electronic digits of gauges on a spaceship dashboard. The scatter is a bright flying saucer-like symbol which triggers the bonus round.

The bonus round in Drone Wars is a fun one, we have to admit. When you land three scatters, you will unlock the Drone Wars Battle Plan. You can choose between two bonus games – the Space Attack and the Planetary Assault. In Space Attack, you get five free games and before each spin, a number of symbols appear on the reels only to be destroyed by a drone and turned into wilds. With so many wild symbols covering the reels, your chances of big wins become significantly higher. Planetary Attack is a fun, arcade-like game where you’re the universe’s only hope to destroy a fleet of drones, using your laser weaponry. Each destroyed drone brings you a coin reward. Be careful, though, as these unmanned aerial crafts will retaliate and if you get hit four times, it’s the end of the game. If you manage to destroy 20 drones before being struck fatally, you will win a prize of 50x your total bet. With these amusing features, an RTP of 96%, and a wide betting range spanning £0.01 – £250, this is a very enjoyable space-themed slot that not only sci-fi fans will cherish. Remember to come back after your intergalactic adventure to let us know how many drones you destroyed and how much cash you won. That’s what our comment section is here for!