EmotiCoins – Smile and Be Cool

Microgaming are known for creating slots that sort of resemble famous movies when they can’t acquire the rights, such as “Thunderstruck”. But of all the films to rip off, did it have to be “The Emoji Movie”?

July 2021 may be a bit late for the release of “The Emoji Movie”, but it’s just in time for Casumo Casino’s bonuses! 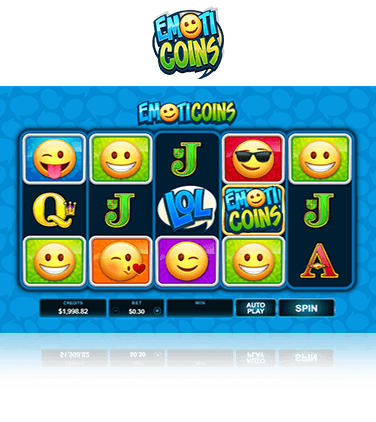 The thing is, emojis just aren’t a particularly compelling theme for slots, visually speaking. They were created by design to be as simple and minimalistic as possible, and that’s the exact opposite of modern slot symbols which are beautiful, detailed and sometimes look like tiny pieces of artwork in and of themselves. The clashing design leads to a look that’s bland, boring and forgettable. Unfortunately, you won’t find that much more excitement in the gameplay, either. There isn’t any sort of bonus game, just a free spins bonus which gives you 10 spins with no multipliers if you get 3 Scatters anywhere, which is pretty hard to get. The other big feature of the slot is that occasionally symbols will turn into Wilds for a guaranteed win, but that was completely and fully random, and it didn’t feel like I as a player had any engagement or control over when it happened.

This slot isn’t a bad one, don’t get me wrong. Trust me, I’ve played a whole lot of terrible slots in my lifetime, and I’m not above letting you guys know when I’ve stumbled upon one. But the thing is… It’s not a particularly good one, either. The visuals are very boring and uninspired, and the bonuses and payouts were quite unsatisfactory, at least as far as I could tell. And the worst part is that this slot just came out, it’s brand new, and Microgaming tried to hype it up with trailers and promotions to capitalize on the movie. It has no excuse for being just “meh”, and that may be the biggest crime of all.