You’ll be beating your chest with excitement in this wild slot from NextGen. Experience a great selection of bonuses as Gary the Gorilla eats his way through bananas and collects winnings! Play our free demo now to join in the fun.

Itching to play for real money? We recommend NetBet Casino, the only place to be in January 2021. 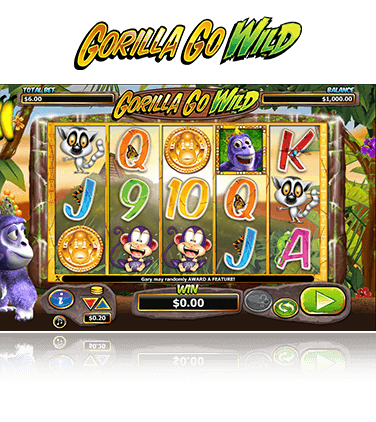 The Rules and Features Explained

This jungle-themed slot features very well designed graphics amid 5 reels, 3 rows, and 25 fixed paylines. It’s been developed by NextGen and features the title character Gary the Gorilla as the Wild symbol. Wilds replace all except Scatter, recognisable as an ancient temple. Gorilla Go Wild has a selection of 4 bonus features for free spins, all with different multipliers and characteristics. These features become available the more time you spend on the game. Known as Gary’s Feature Kingdom, 3 or more Scatter symbols on the reels unlocks the following options: Gorillionaire Win Spins offer 10 free games where all wins are doubled, with the possibility of the feature being re-triggered. The Stay Wild feature awards 10 free spins and any wilds that appear on the reels remain in their position for the duration of the free games. The Mega-Rilla Multiplier feature gives 10 free games once again and features an increasing multiplier, which is activated by the number of wilds that appear throughout the games. The maximum multiplier amount that can be reached in this feature is x10. Lastly, the More Wilds feature runs through 10 free spins that turn random symbols into wilds depending on the amount of times they appear. This feature also has the ability to be re-triggered. While these features are all available via 3+ Scatters, there’s also the bonus of Gary Goes Bananas, which involves the large character to the left of the reels eating bananas randomly throughout the game, advancing to different areas of the jungle and awarding more time in Gary’s Bonus Time Feature. The Bonus Time awards vary between x50 to x1000 multipliers or a free pass into Gary’s Feature Kingdom.

A Breakdown of Symbols and Payouts

See a Preview of the Game here

Conclusion – You’ll get Jungle Fever with this slot’s Thrilling Bonuses!

Start feeling like the King of the Jungle in this luscious slot! You’ll get a lot of bang for your buck thanks to its huge selection of features and bonuses, too. The sheer number of extras might be confusing for some, but we think it makes the game all the more exciting by presenting unique and thrilling ways to win. The game’s visuals are pretty spectacular and the purple tinge of Gary the Gorilla’s hair makes him seem rather cute instead of menacing! You’re encouraged to spin the reels for longer as Gary eats his way through a bunch of bananas to award you extra bonuses, but you’ll also have the chance to win big in the main game. Smaller payouts fill the space between medium-sized wins rather consistently, while bigger bets might open up the opportunity for more randomly awarded prizes. Groove along to music inspired by the jungle and swing through the trees to claim your winnings! Have you enjoyed Gorilla Go Wild as much as we have? Sing its praises in the comments section below.