Galactic Gopher – To Infinity… And Gophers

Sometimes, an idea is just too ridiculous not to create – that’s how we ended up with fidget spinners, after all. This slot in particular is another one of those insane ideas, but did the craziness pay off at all?

If you’d like to join this gopher on his adventures, feel free to blast off to 32Red Casino check the bonuses for January 2021! 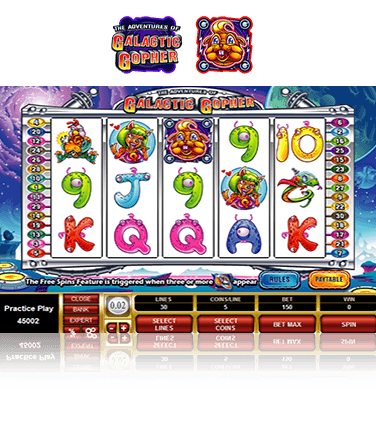 By far the worst aspect of the slot are its visuals, which… Well, to put it bluntly, don’t really look particularly great. In fairness, part of it is because the slot is rather old, so it hasn’t aged as well as its contemporaries, but the symbols still look like low-quality jpegs, and the menu is clattered and clunky, as it is in quite a lot of older Microgaming titles. Where it suffers in presentation, however, the slot makes up for in features. The big one is the free spins, which is activated by three or more Scatter symbols, awarding you with 10 spins and a multiplier at the end. There’s also a Gamble feature that can double or quadruple your winnings, but it’s kind of risky and not as great as same feature in other Microgaming slots, like the Untamed series.

I wish I could wholeheartedly recommend this slot, I really, really do. But the thing is, while there’s certainly lots of great ideas in it (such as the Gamble feature, which allows you to pick the color and suit of a card and increases your wins based on how much you guessed), at the same time those ideas haven’t aged particularly well, and have been utilized better in other slots. As it is now, “Galactic Gopher” isn’t terrible, not even close – trust me, I’ve played a ton of bad slots in my days, this isn’t one of them. But at the same time, there’s also no reason to play it, other than as a time capsule, a curiosity of slots past. If that’s not something that would interest you, you’re likely better off with a newer offering.