Girls with Guns Jungle Heat – An Overview of the Features

A ruthless drug baron, girls in skimpy costumes, machine guns, and heart-shaped grenades – pretty universal aesthetics and maybe not the most original storyline out there but still enough to get you some rewards with free spins and special wilds. Test the free version below!

Feeling risky? Then play the game for real money at Guts Casino and take advantage of their hot deals for January 2021! 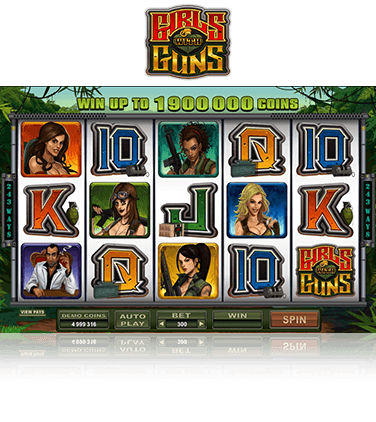 As can be easily deduced from the title, Girls with Guns Jungle Heat is set in the wilderness of Central America and follows the adventures of some fearless ladies wielding weaponry worthy of a Tarantino movie. It’s hot and humid in the jungle, so naturally these heroines are scantily clad, the way all female characters in action flicks are, and since we’re getting the obvious things out of the way, one stereotype at a time, let’s just add that since this is the jungle of América Central, there’s a drug lord involved, too. The six girls who stand for the high-paying symbols have to take on this narcotrafficker and his henchmen that make up the rest of the paytable alongside the house where he probably conducts his business. The standard card symbols Ace to Jack are the low-value symbols. The game logo is the wild that replaces all other symbols except the scatter – a heart made out of grenades, which activates the free spins. A symbol with the ladies’ silhouettes posing Charlie’s Angels style is a special wild that expands over the entire middle reel.

The slot is one of Microgaming’s releases that utilise 243 ways to win over five reels and three rows. You can wager between £0.3 and £45 and expect frequent low winnings interspersed with some big ones, as this is a typical mid-variance slot with an RTP of 96.55%. There’s a round of 15 free spins with a special expanding wild feature – before each spin, one of the girls appears on a random wheel, brandishing her weapon and making the entire reel wild, giving you more chances of hitting a winning combination. In the base game, you can see the six girls’ silhouettes as an expanding wild, covering the entire reel 3. Although there’s no bonus game and a multiplier, this slot will still be very well liked for its popular theme, awesome graphics and cool animations, as well as the special wilds features. Have you tried it already? Take a moment to tell us how you liked it by leaving us a comment in the section below!