Native Americans have had a history of being portrayed as dumb savages by the media, and that trend sadly continues with Microgaming’s slot. But the question is whether the “big cash” is really worth it.

To play this slot and many more, make sure you go to 32Red Casino and take advantage of their offer for July 2021! 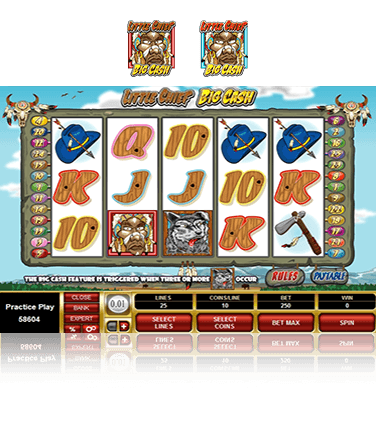 The sad truth is that this slot just isn’t all that good, at all. Visual-wise, it’s a mess. Even if you’re more interested in the racist “savage” look of Native Americans, there’s still a visually appealing way to do it, as Disney’s “Peter Pan” has shown us. But these symbols look horrible. The Indian princess looks like she was drawn mid-sneeze, the wolf looks like he’s been dead for some time, and the titular Chief barely even appears to be human. Combined with the fact that there’s no music, and the slot has completely failed in that department. And I wish I could say that the slot plays much better than it looks, but that’s, unfortunately, not the case. Wins are infrequent and, when they happen, they’re not particularly big (which makes the “big cash” part of the title nothing more than a big lie). The bonus game, which triggers when you get three Scatters, gives you five free spins alongside a bonus game where you uncover rocks to reveal more free spins, but… It’s just so boring and uninspired. And worst of all – even with the bonus game, you won’t win that much.

It’s rare for me to find a slot that so thoroughly fails to entertain on every level. A lot of slots are actually really good and I feel comfortable recommending them. Most of them are just harmless fun. But this slot is ugly, boring, uninspired and feels like a rip-off, monetarily-speaking. It feeds on stereotypes which it doesn’t even pull off all that well, its art is among the worst I’ve ever seen, and the bonus game feels like a last-minute addition because the developers rightfully realized that they couldn’t release it as is. I wish I could say that there’s at least one positive to the slot, but unfortunately this is one of those rare cases in which there are no redeeming qualities, absolutely nothing I can point to and say “Yep, this slot is worth a few spins just for that”. And honestly, this fact itself is pretty impressive all on its own.