Paradise Found – A Close Look at the Game

This simplistic video slot by Microgaming doesn’t stand out with many features yet manages to keep players glued to the screen with its unique Tibetan theme and one unique bonus round. Below you can find a demo version of the game and try it for free, no strings attached.

Do you want to try the game for real money? You’ll find it at Guts Casino – our number one recommendation for June 2021. 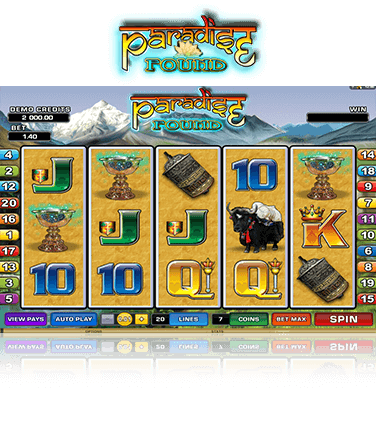 Paradise Found is a 5-reel, 20-payline slot developed by Microgaming that stands out mainly with its Himalayan theme. The game isn’t among the most feature-rich ones, as, except for the base game, it only offers one bonus round. To get to this round, you need to get a Lotus symbol on the first reel and the Potala Palace special symbol which only appears on the fifth reel of the game. Except for the first reel, the Lotus symbol may also appear on the fifth one, and acts as a wild. The Traveler symbol, on the other hand, is a scatter and might bring you a winning of up to x100 your bet. Still, the highest-paying symbol is the Buffalo one which can award you with a win of up to x750 the amount you’ve betted for the line.

The Symbols and the Payouts They Offer

How the Game Looks

If you’re not a fan of complicated rules and payout structures, then you will certainly enjoy playing Paradise Found. The gameplay is very straightforward and can only be interrupted by the Lotus Wild Feature. In this feature, the reels stop moving and you get random Lotus Wild on the second, third or fourth reel ten consecutive times for the opportunity of ten additional wins. This undoubtedly is one of the most unique bonus features that we’ve seen so far and one that can bring you huge wins. Other than that, the game offers regular small wins and a very pleasant theme based around a travel to Tibet. Have you tried this slot already? Share your impressions of the game in the comment section below! We would love to hear about your experience!