A lot of slot names and themes tend to be based on puns and wordplay, but admittedly, “SWAT Team” tends to have the most clever one I’ve seen so far. Does the rest of the slot hold up, though?

Why don’t you land on 32Red Casino and claim their offer for January 2021 so you can leave that buzz behind you? 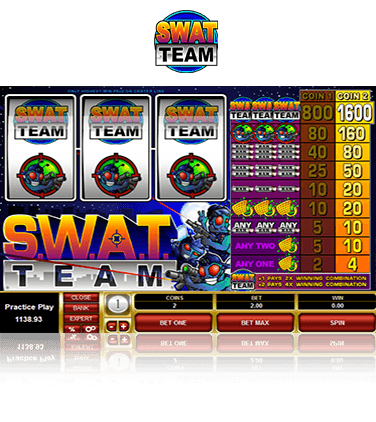 The sad part here is that, while the premise is strong and offers a lot of comedic possibilities, Microgaming haven’t taken advantage of any of them. Instead, what they’ve built is just another classic slot that doesn’t stand apart from its contemporaries in any way at all, other than by name and presentation. To me, it seems pointless to create a slot that’s exactly identical to the ones that came before, but I suppose there must be a market for them. There’s not a whole lot to talk about here, since the developers have attempted nothing new. Adding a second coin to your bet doubles the prizes, and the highest-paying symbol is also a Wild that can substitute for any other. That’s it. It’s the most standard of standards as far as classic slots are concerned, and as much as I wish that at least something new was added (no matter how small), unfortunately that’s just not the case.

Alas, I don’t feel comfortable recommending “SWAT Team” in good conscience. It is my belief that as consumers we should support innovation and quality, and this slot has neither. There’s absolutely no point in playing it when there are other classic slots just like it that do the exact same thing, right down to the amount you win per spin, except they do it better because they don’t look and sound absolutely awful. Microgaming, or pretty much any other slot developer in the world, are at their best when they’re pushing the boundaries of what we considered possible as far as slots are concerned, and unfortunately that’s just not what they did here.