This Microgaming slot inspired by the mystery surrounding Russian Princess Anastasia pays tribute both to the historical figure of the daughter of the last emperor of Russia and the popular animated movie from 1999. Come try the demo for yourself – you’ll enjoy the graphics, no doubt.

Ready to collect real money prizes? Then go to 32Red Casino – our top choice for January 2021! 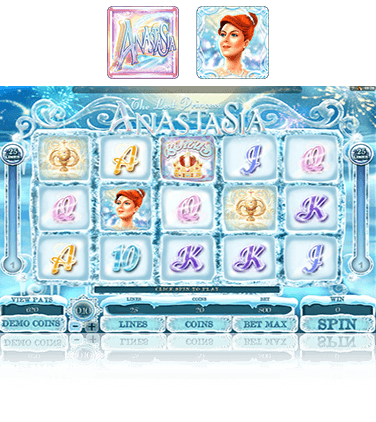 The Rules and Features

The Lost Princess Anastasia is a 5-reel, 3-row, 25-payline video slot dedicated to the youngest daughter of Tsar Nicholas II. She and her entire family were executed in July 1918 by the Bolsheviks, who had replaced the imperial rule with a new, Communist regime in Russia the previous year. However, her death was only confirmed in 2007. Beforehand, the image of Anastasia had been one veiled in mystery, inspiring books, plays, and movies. A beautiful animated musical appeared in 1999 and got many accolades. The images in this Microgaming slot strongly hint at the ones seen in the movie. The highest paying symbol is the game logo. It’s also a Wild that substitutes for all others except the Scatter, which is actually the imperial crown. Land 3 or more Scatters and you’ll be awarded 5 Free Spins, which can be retriggered. Moreover, during the feature there will be a second Wild, which looks like an ice cube. One or more of these will appear after every free spin, replacing random symbols. The other high paying symbols include Anastasia, Tsar Nicholas II, Rasputin – the famous friend of the Romanov family, and a Fabergé egg. All symbols pay left to right except the Scatter, which pays in any position. There’s quite a wide betting range, allowing you to bet as little as £0.25 and as much as £50 per spin. To change the bet simply select the coin value and the number of coins you’d like to stake.

Check Out This Preview

The Lost Princess Anastasia is a fun slot to play as it has the potential to teach you about history and take you back in time. It focuses on the positive side of the story, very much like the musical does, so don’t worry – you won’t see any disturbing images of executions and excavated bodies undergoing DNA testing. The payouts may not come as often as we like but playing on does pay off as the free spins feature is truly rewarding with the multiple Wild symbols turning your reels into a money-making machine. Have you tried it already? What’s your favourite thing about this game? Let us know below.