Bobby 7s – An Overview of the Key Details

Ello, ello, ello, what’s goin’ on here then?! Check out this comical cops and robbers slot with crooks a judge and of course our local bobby! Chase after the loot hidden on the reels and in 3 bonus games! Play a demo version for free right here.

If you like the sounds of this game and fancy playing for real money head over to BetVictor, our top choice for March 2021. 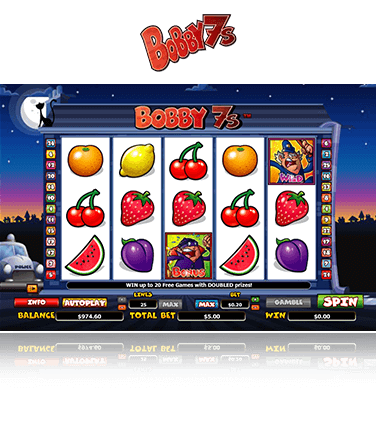 Rules and Features at a Glance

Played out over 5 reel sand 3 rows with 25 paylines this slot includes 3 bonus features. The first of the bonuses is the crook loot bonus. When this symbol appears on reels 3, 4 and 5 simultaneously you pick a crook icon to surrender his loot to you. The second bonus is characterised by the judge, when more than 3 of this icon appear on reels 2, 3 and 4 he awards a multiplier. The amount of times he slams down his gavel equal the multiplier applied to your bet (up to a maximum of 5x). The final bonus begins when the 3 police 7 symbols appear on reels 1, 2 and 3 at the same time. This second screen round reveals a ladder marked with numbers. Players must guess if the next number revealed will be higher or lower than the one currently on display. Every correct choice moves you along the cash ladder (awarding up to 500x the win). An incorrect guess pays the prize value passed previously on the ladder. The Wild in this game is bobby the policeman, he substitutes for all symbols except the 3 scatter symbols mentioned and the bonus scatter. The bonus scatter is the thief, when he hits reels 1, 3 and 5 players pick from the thiefs to reveal a mystery number of free spins (the maximum rewarded is 20). The masked thief awards a 2x multiplier on your bet and more free spins can be retriggered during this round. Players have the option to gamble one each win, this is done by correctly guessing the colour or suit of the next card to be dealt from a stack, guessing the correct colour doubles winnings whilst the correct suit will quadruple wins.

Check out the Game in Action Here

Named after the English word for policeman this is a comedy slot based in a London of yester year. There’s a strong nod to the cult UK TV series the Benny Hills show in this game. The model of police car is a dead giveaway that this slot is set in the past, before gadgets and cybercrime we’re looking at swag bags and policemen carrying truncheons. The jovial animations bring high scoring icons to life and winnings are underlined by punchy sound effects. Its hilarious to watch the bobby when he’s activated, chasing after a criminal to the sounds of police sirens flailing his truncheon. To bonus rounds are the key to the big prizes. These 3 mini games popped up regularly whilst I was playing, initiated by icons resembling the lucky number 7. Generously, all bonus symbols can also be won in free spins mode. Although the coin jackpot isn’t much at 100 coins, there’s the chance to win a 500x multiplier in the Hi-Lo police bonus round. There’s lots of choice in playing style with 25 lines to choose from and a range of stakes making Bobby 7s plenty of fun and a pleasure to play.