Microgaming’s Untamed series has been well-established within the slot-spinning community as the wildest series of slot out there, but does the wolf-themed installment offer enough to distinguish itself? Check it out for free here!

There’s going to be as many full moons in its January 2021 as there are real money bonuses in Casumo Casino! 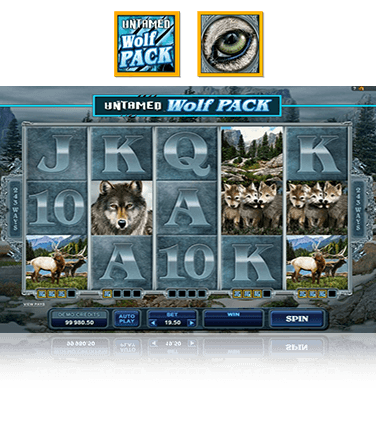 The honest truth is that this slot isn’t anything mindblowing, even by the standards of the other slots in the same series. It’s got the exact same features and characteristics that you’ve come to expect – the nature-inspired symbols are still pretty, the stacking wilds are pretty great, and the gamble feature is still the best in the slot kingdom, allowing you to select exactly how much of your winnings you want to bet for a chance to get even more money. But with that said, this particular iteration of the “Untamed” series pales in comparison to its brothers. The main difference between the various slots in the series, aside from the distinct wild animal chosen to represent them, is how the bonus games work. Each one allows you to win a certain amount of free spins and throws in a bonus unique to that specific game, in this case – running Wilds, which increase the number of Wilds during your spins dramatically and has the potential to bring you great rewards. But when compared to other bonuses, it doesn’t fare as well.

Conclusion – Runt of the Litter

Now, don’t get me wrong – this slot is GREAT! Like, really great! I don’t mean to disrespect it in this review, because if you choose to play it you’re definitely not going to go wrong. It’s got plenty of bonuses, features and extras to keep you engaged, and it looks just as beautiful as its compatriots. But these compatriots are exactly the problem. When all “Untamed” slots are so similar with just one different feature, and that feature isn’t as great in this case, the slot as a whole suffers. Not by much, because like I said it’s still a great package overall, but another slot in the series might be a better investment.