An ancient Egyptian mystery is waiting to be unveiled. If you want a piece of the slot action, then we have great news for you! You are the antagonist in this 5- reeled adventure called Mummy Gold. No need to look for a Nektan casino – we have the game here! 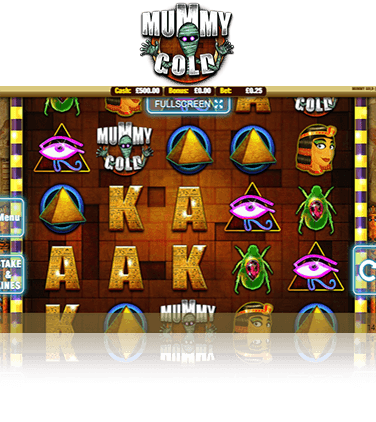 At its core, Mummy Gold involves a very simple and straightforward gameplay. Using the interface comes naturally and, frankly, it’s been rendered down to the bare minimum of buttons needed to play a slot. Nektan has stuck to its guns also in terms of design – the game has the standard five-reel, 3-row slot layout that the company slots are known for. On the other side of the spectrum is the mysterious Egyptian tomb theme that hits the nail on the head. The leitmotif of vicious creature roaming around is also very popular when it comes to slots. You’ll see the ancient mummy in action at the pay-table. The pay-table itself is predominated by familiar symbols, which explains the well-known payout scheme.

Take note of the number of pay-lines, which is 25, and the fact that they pay from left to right. Before you even get anywhere near pharaoh’s riches, however, you’ll need to match at least three paying symbols. Pretty middle-of-the-road approach on behalf of the developer if you ask us, but our educated guess is that the game was aimed at for a wider public. Looking at it from that angle, you could say that Mummy Gold will be a well-reasoned choice for players of practical turn of mind who don’t like to invest big sums of money in gambling. That makes it a beginner-friendly slot benefitting from simple and concise rules of play.

If you ever happen to go in an Egyptian crypt, you should try and avoid waking up the mummy at all cost, or so they say. Mummy Gold’s a bit different though. The game’s lead character and symbol is not the frenzied ghoul we’re used to seeing in Holywood’s poor representation of the Egyptian pyramids. Instead, the mummy is on a mission to make your life easier every which way possible. It’s taking the form of both a Wild symbol and the biggest multiplier in the game. Wilds substitute for other reel symbols for the purpose of completing winning combinations. And since all good things come in threes, three Wild mummies always pays the highest value. If you want the best of the lot, which’s a payout 1000 times your stake, you’ll need to line up five Mummy Gold symbols.

In typical for Nektan’s slots fashion, Mummy Gold has the Free Spins feature, which triggers when three Spins symbols appear on a pay-line. We’ll not make fair weather guys- you’ll have to spin for quite some time for Free Spins to kick in. And without the auto-play feature, grinding for free spins becomes a bit of an annoyance but you’ll get there eventually. We are firm believers that Mummy Gold’s Free Spins were not meant to be a game changer – and you shouldn’t treat them as such. They are just a nice addition to the game, nothing more nothing less.

Play On the Go

Just as the desktop version of Mummy Gold is quite enjoyable to play, so too the game’s mobile application feels convenient and on point. This title is a mobile slot in all but name. It has been developed according to the latest cross-platform standards so that it’s compatible with Android and iOS devices. The game itself is powered by a very light web-based application, that you can load on almost every web browser. The app’s layout looks practically the same on any device and operating system, thus ensuring a seamless transition between platforms. All things considered, by devoting some of your personal time to Mummy gold you’ll be able to take advantage of playing slots on the go in full measure.

To put it another way, this a disguised low-variance slot. That is to say that it has an affinity for low payouts but at the same time, looking at the pay-table, we see an x10 difference between the payout for three-of-a- kind and five-of-a-kind Mummy Gold symbols. The pay-table reveals a whole nother story when we look at the rest of the symbols. None of them guarantees that If you hit a combination of four or more of a kind you’ll hit it big. A piece of advice we could give you is – try to not get caught up in chasing your losses because low-variance slots are not suitable for that. On the other hand, the likes of Mummy Gold are perfect for free spins offers and fulfilling playthrough requirements.

As you may have guessed Mummy’s Gold follows in the footsteps of other great mystery-themed slots with adventure elements. Right off the top of our head, we can think of Pharaoh’s Fortune – one of the best slots from its kind! It features the ever so popular 5-reel, 3-row configuration just like Mummy Gold does but has a bonus round in addition to that. As a continuation of our hits-only recommendation list, we want to present you Cleopatra – an IGT slot you’ll find in most online UK casinos. As a conclusion of this section, we’ll advise you to also check the movie-themed slot Tomb Raider.

Mummy Gold, The Verdict – Not All That Glitters is Gold

We have a decent-looking five-reel mystery video slot by Nektan on our hands, but the developer was by no means the first to exploit that concept. That’s the main issue we have with the game – the sheer abundance of other titles that are a cut above it. Be that as it may, if you’re feeling adventurous and are not in a nitpicky mood, Mummy Gold will provide you with a modest portion of excitement and bonus features, which may just prove to be enough for the time being. So, if you buy into the idea of a simple and functional slot, go ahead and try the game! Don’t forget to stop buy after that and share your thoughts with us – we’ll be delighted to hear what you think of Nektan’s slot.