To play for real money, fly on over to Casumo Casino. It’s the most super casino for May 2021. 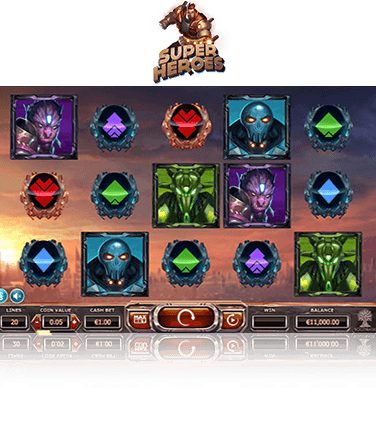 Super Heroes runs deeper than the 20 payline, five-reel video slot it is on the surface. There’s a video sequence introducing the good guys, each of whom was blessed with a name. These protagonists make an appearance during the free spins rounds, which are, coincidentally, triggered by three, four, or five Free Spins symbols (you’ll get four, five or seven free spins). Then comes the Superhero Feature, where there’s a chance that you’ll be able to summon one of six heroes, each of whom triggers another special feature. Mirage turns each high paying symbol into dice, which spins and reveals a mystery win from 5 to 1,000 coins per symbol. Raven throws a rotating blade, which turns up to four randomly selected reels into wild reels. Hopper may have a ridiculous name, but he summons a meteor shower, turning randomly selected symbols into wilds. Tesla changes two to five random symbols into other symbols to guarantee a win, with his impact wave. Trance is only summoned in Free Spin mode, but she conjures up a time portal, awarding up to four extra free spins. Finally, Knox shoots a fire-beam into the total win and it acts as a multiplier reaching as high as five times your win. All the heroes have four levels, which is increased when they appear on the reels during free spins. The higher their level, the higher the reward.

Conclusion – Slots with a Twist

It’s easy to appreciate what Yggdrasil has done here. They’ve ‘gamified’ this slot with a rewarding progressive gameplay narrative, which gives you a wide variety of win outcomes, all while looking slicker than a seal. The animations are some of the best we’ve seen, and they’ll particularly appeal to the legions of comic book fans out there. Far from being tacky and contrived, the characters genuinely seem like they belong in a Marvel or DC production. Except for Hopper. Hopper, with his giant yellow rotor blades that look like rabbit ears. Hopper, with his bright yellow shades that look like swimming goggles. Apart from Hopper, the Super Heroes in this game are cooler than a Siberian breeze. The possibility to win 35,000 coins in one spin is another factor that might get your pulse racing. If you tried the game, let us know what you think in the comments below!