Valley of the Gods – Can You Beat the Blockers?

This slot from Yggdrasil is set in ancient Egypt and new players will instantly recognise that the game does not look or play like a regular online slot game. The unique five-reel, five-row setup features what the developer is calling ‘blockers’.

Would you like to try it for real money? Head over to Casumo Casino – our top choice for playing this slot in October 2021. 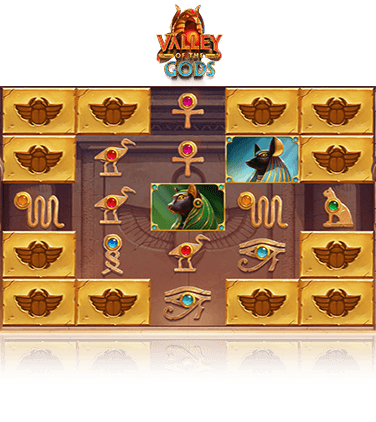 Real Money Casinos with Valley of the Gods

Online slot games do not typically come in a five by five grid format. The reason Yggdrasil has thought outside of the box on this one is down to an unusual feature where certain parts of the reels are blocked during the game. Players can remove these blockers by landing wins in close proximity. It’s a mechanism that is clearly inspired by match-three smartphone games such a Candy Crush Saga. The blocker-system is used to build towards this game’s winning feature round. Landing winning symbols will release scarabs that destroy blockers for you. After you have busted all the blockers, all subsequent scarabs will turn into blue or red scarabs that are collected by the gods at the side of the reels. Collect five of the same colour and you’ll unlock multipliers or extra lives. An extra life acts as a safety net during free spins by awarding a re-spin on a losing result. It sounds complicated, but you can pick up the rules and gameplay mechanics pretty quickly by just watching the action. In typical fashion, and one of the hallmarks of a good Yggdrasil game, Valley of the Gods makes actually playing this game rewarding. Too many slots these days feel like they have been designed to be left on auto spin.

The Valley of the Gods slot is yet another example of the care that Yggdrasil is putting into its online slot games these days. Too many developers are pumping out tripe that is, quite frankly, an insult to slots players in the UK. There is a real sense of quality to this game. It also features the iSENSE 2.0+ technology that allows it to be played in ultra-high definition. The RTP of 96.2% is nothing to write home about. Expect to lose around £4 for every £100 you spend while enjoying this one.