Perhaps Yggdrasil’s inspiration behind developing a slot themed on viruses was a tongue in cheek dig at skiving colleagues, or maybe they genuinely felt the market was ripe for a game as fanciful and outlandish as this five-reeler surely is.

You might want to play for real money, which is a possibility at Casumo Casino, the healthiest casino for May 2021. 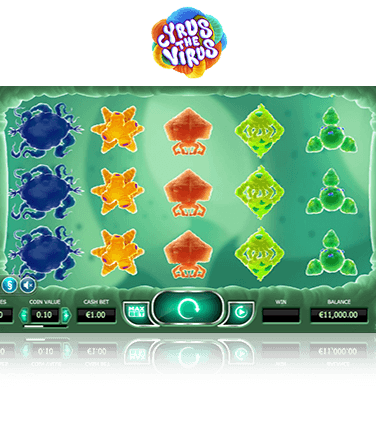 Cyrus the Virus contains a wicked wild symbol, which only appears on the third of five reels, and when it does, it spreads its ghastliness faster than an airborne disease all over the entire reel and triggers a respin. It infects and subsequently substitutes for all symbols, giving you a healthy arsenal of win possibilities over the game’s 10 paylines. These lines link together like strands of DNA across the screen, paying both ways. Just like The Expendables movie did for the action genre, this slot is an A-list parade of all your favourite diseases. We’ve spotted typhoid, malaria, cholera…there’s even Japanese encephalitis lurking about. Another looks like a segment of an orange, except for the fact it’s blue, and it might be polio. The colourful bunch make up the symbols, and they pay pretty poorly, except for the four-eyed, navy blue cough cloud, which generates a game-high 2,000 coins for five on a payline.

It’s easy to award bonus points for originality here, but it feels like the developers were so hell-bent on getting them that ‘being unique’ was more important to them than to a 16-year-old with a face tattoo. It must be said that the visuals are far more pleasant than a debilitating illness, and the music is tolerable for the first 17 loops, until the point that you get an expanded wild, and you are suddenly thrust into a 2070s Kraftwerk cover band gig set in a laboratory. Gameplay is as smooth as silk – no complaints there, and the developer has also done a good job to make Cyrus the Virus socially responsible. For example, warnings flash up showing you how long you’ve been playing and how much you lost, while instructions are as clear as a negative aids test. If you tried the game out, let us know what you think in the comments below!

The following section of our Cyrus the Virus slot review is going to be dedicated to the most frequently asked questions about the game. We are going to cover the rules, features and real money casinos that offer this title.

How to play Cyrus the Virus slot?

Cyrus the Virus is a slot that may look complicated at first, though it is actually pretty easy to learn. Our best advice is that you read the Cyrus the Virus rules and features overview that we have prepared which tackles all the important game-related details. Doing this will give a solid knowledge base to start playing and improving your skills.

Where to play Cyrus the Virus slot?

We have managed to find the three best online casino sites to play Cyrus the Virus slot in the United Kingdom. There you will find generous promotions, a wide diversity of games, full mobile compatibility, awesome live dealer titles and a lot more.

What features are there in Cyrus the Virus slot?

Cyrus the Virus, like most games developed by Yggdrasil, features many possible symbols and payouts. On the three rows and five reels, you can expect to find special features, free spins, wilds and a maximum win of x80,000!