This is a 30-payline, five-reel video slot from Scientific Games. The game sets you in a forest, presumably somewhere deep in Aztec territory during the reign of the notorious ruler. Try it out with our free demo version below!

Take it to the next level and play for real money, which is possible at 888casino, the number one casino for January 2021. 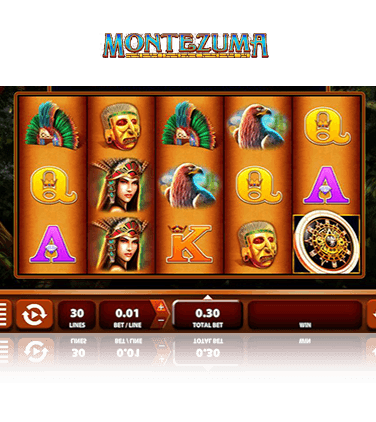 Real Money Casinos Where You Can Play Montezuma

The wild symbol features a temple atop which many a head would have rolled, had this been a real Aztec temple rather than just a graphical representation. It appears only on reels two and four, and it substitutes for all symbols except the scatter. The feature symbol is a big, ornate wheel of sorts, and if you get three, four or five of them you’ll unlock the bonus feature. Three will give you 3x your total bet during the free spins, four and five will reward you with 10x your total bet. More free spins can be won during the bonus round by getting two or more feature symbols. The amount of free spins you get is determined by the spin of a wheel, and the maximum is 25.

Symbols include the mighty Montezuma himself, who dons the top half of an eagle’s head upon his own. He’s the highest paying symbol, and one of his rumoured many mistresses, or perhaps one of his wives is the second highest payer. Other symbols include an eagle, a headdress, a mask, and a dragon. These are supplemented by the rather more familiar and mundane ace, king, queen and jack.

Conclusion – Not to be Trifled With

This game, like the fearless leader himself, doesn’t mess around. There’s no video intro and you are thrown straight into the action without passing go. The name Montezuma is defined as “he who is angry in a noble manner”, and one suspects he’d do more than keep his nobility in tact if he survived long enough to play this game. Looking beyond his initial confusion at what on Earth a slot machine is, he would be pleasantly lifted by the crisp graphics, the sumptuous soundscape, and the frenetic free spins. He’d revel in delight at the flexible wagering limits, which might even put his typically bloodthirsty god Quetzalcoatl in a good mood. There are perhaps better slots out there from Scientific Games, but this is worth sacrificing an hour or two. If you played the game, we want to know what you think! Use the form below.