This SG Gaming slot does not skimp on clichés straight out of the beer halls of Munich. The lack of Oktoberfest in the title did not stop SG from going all out on the theme, both visually and musically. There’s also a free spins feature, try the demo below.

If you’d like to play for real money, simply go to 888casino, which is our top choice for playing this slot in January 2021. 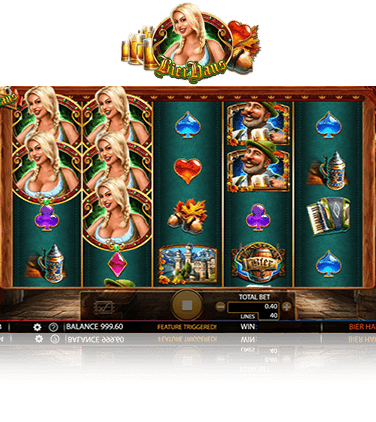 Real Money Casinos Where You Can Play Bierhaus

Dive into this one and you’ll be playing with fixed 40 paylines. You’ll want to be landing anything distinctly Bavarian-looking to be cashing out decent returns. The gemstone-style playing card suit symbols all payout at the same rate. You can tweak your bet to anywhere between 40p and £40. A jolly Oktoberfest-style tune and beer hall murmurings provide the musical backdrop to the action. The bonus feature here is in the form of a free spins round. Up to 80 free spins can be awarded, but it’s a little more complicated than that. Five or more scattered feature symbols (that’s the rather blousy blonde there) will trigger the feature. However, for every feature and/or gold feature symbol (that’s the rather blousy blonde there holding three beers) above the initial five feature symbols required to trigger the feature, five additional free spins are awarded. Keeping up? Good, because there’s more. Each gold feature symbol (the one holding the beers, remember) that participates in the feature trigger combination is replaced by a ‘persisting wild’ symbol (that’s the one with three beers and NO rather blousy blondes at all) which locks into a single reel and the start of the free spins feature. One of the most authentic things about Bierhaus is the way it truly captures the essence of German bureaucracy.

Conclusion – A Jolly Knees Up Affair

Bierhaus is complex in the sense that its major symbols are very similar and the rules of the bonus feature are full of ifs and buts and exceptions, but honestly, who bothers with the rules of online slot games? Pick your bet, spin the reels and hope for the best. That’s all any online slot player does anyway, isn’t it? Once you take your mind of whether you are landing combinations or not and just enjoy the swing of the music, you’ll be smiling as wide as the drunken, lederhosen-clad, moustached chap in the game. Another beer, sir? Ja!