This five-reel arcade slot from Scientific Games is set in a temple from Ancient Greek mythology, which sets it up for a fall of epic proportions. Homer might turn in his grave if he saw it, but this game offers more than a middle-of-the-road experience.

Playing for real money is the next logical step. Give it a spin over at 888casino, king of the throne for September 2021. 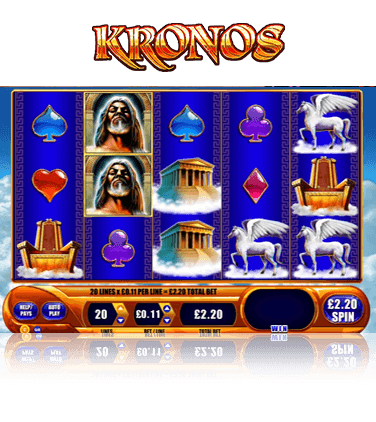 Real Money Casinos Where You Can Play Kronos

In Greek mythology, Kronos is a Titan who counts Zeus, Poseidon and Hera among his offspring. With that in mind, you’d expect something quite majestic from this game. Unfortunately, this tacky title is about as epic as a sausage roll. The game has five reels, three rows and 20 selectable paylines. Bets range from 1p to £3, and symbols range from a unicorn to a throne, via an amulet, a temple, and Kronos himself. There’s nothing legendary about the graphics either, which, like reading a book in a sunbed, will leave your eyes squinting. The cloudy backdrop is as fluffy and unsatisfying as candyfloss aftertaste, while the menu interface is barely clearer than Boris Johnson’s conscience. The audio team probably mistakenly thought they were assigned to a 1980s sci-fi elevator-themed slot – they clearly missed the boat. The star-sprinkled, tippy-tappy twinkles that sound up upon spinning the reels have all the grandeur of a bunion.

Wilds come in the shape of lion heads that look like they’ve been cast in chrome, and these will appear only on reels 2, 3 and 4. The Feature symbol is a golden rotor blade with a giant K engraved in the middle. Three of these trigger the bonus feature, which can result in a maximum of 100 free spins when five appear, making it your primary weapon.

All Symbols and Payouts (total bet value of 20)

Kronos is not the best slot on the market, and that’s an understatement of godlike proportions. To be fair to Scientific Games, they have much sharper tools in their tool shed, but that’s partly what makes this game so disappointing. Fans of Greek mythology have enough slot options already, and this one lacks a bit of punch. However, fans of money may rejoice at the high max win of 250,000 coins, and the possibility to set bets per spin very low and reasonably high. But, if you want some new-fangled techno-fetishist type slot experience, you’d better look elsewhere.