For over 1,000 years since the High Middle Ages, the folklore surrounding fire-breathing, flying, serpent like creatures with four legs. Yggdrasil have capitalised on this captivating troupe and created their own 25 payline slot game based on it.

If you managed to escape a fiery death, you can play for real money at Casumo Casino, the top casino for June 2020. 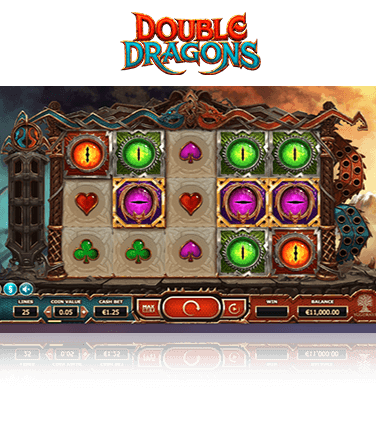 This slot has a five-reeled, three-row basic structure which is very common amongst most modern slot games today. With 25 fixed paylines in total, the game offers various opportunities to score wins including bonus features and free spin functionality. There are only eight standard symbols in the game consisting of what we can only discern as four different coloured orbs, the purple orb offering the largest payout at 125 coins for a row of five. The other four symbols consist of a diamond, heart, spade and club only with different colours than what we are used to. The slot contains a number of different bonus features that really add to the excitement. Firstly, hitting any combination on the reels will trigger the Dropdown Win feature whereby winnings symbols will disappear with new symbols dropping down to take their place giving you another chance to win. If you have four consecutive wins on one spin, you will activate the Double Dragons feature. This feature will unleash two Highstack Wilds that can be between seven and 28 symbols long. If you manage to hit a Fire Dragon head symbol, it will unleash a torrent of fire which will convert between two and three other surrounding symbols into wilds. The Ice Dragon head symbol will activate a multiplier of two on each win it accompanies. If you collect up to nine of either of the dragon heads, you will be awarded five free spins. During free spin mode, you will only require two Dropdown Wins as opposed to the usual four in order to activate the Double Dragons feature.

The Double Dragons slot game was only released in 2016 and has already risen to become one of Yggdrasil Gaming’s most popular games and its easy to see why. The game is packed with bonus features, has an awesome theme and offers players plenty of opportunities for wins and a decent return to player rate at 96%. The game is supported across all the usual platforms and responsively designed for mobile use as well. Have you played this slot game yet? Let us know your thoughts in the comments section below.