Big Foot – An Overview of the Key Features

Big Foot exists! At least he does in this fun packed feature heavy slot from Microgaming. Strike it lucky playing the hunter on the trail of the abominal Snowman himself and win free spins finding his fifteen footprints. Why not try it out for free using this demo version.

Like what you see and want to play for real money? Head over to Dunder Casino, our top recommendation for June 2021. 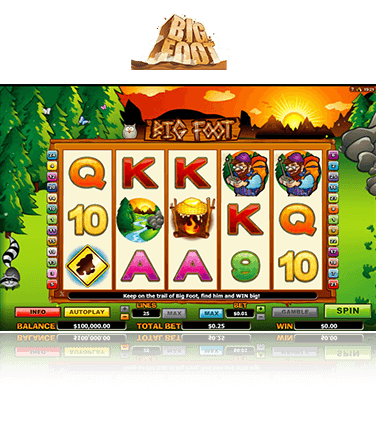 Get to know the Rules and Features

This 5 reel, 25 pay line slot from the developers at Nextgen has a fun camping theme. As well as finding the elusive Yeti, there are some great base game prizes. Higher paying symbols are emblazoned with hunting parafanalia such as the fellow big foot enthusiasts, a campfire and food provisions. Finding the biggest winner of them all, the lost backpacker on all 5 reels award a nice 5,000 coin prize. Big foot himself naturally acts as the Wild Symbol, appearing on reels 2, 3 and 4 he substitutes for all except the Scatter Symbol. The Big Foot Footprint Scatter is triggerd with three or more on the reels. Winning combinations are greeted with a satisfying thud as an animated footprint lands centre screen changing it to a winter scene initiating the free spins round, with 10 turns and a 2x multiplier up for grabs. The Big Foot Bonus round is a classic pick and reveal setup, where players chose objects to win cash prizes. Finding a matching pair, or a pair of eyes in the forest will give you the chance to hunt the beast himself and doing so pays handsomely.

Watch a video of the Game in Action here

If you’ve ever fantasised about joining the hunt for the Abominal Snowman, aka Bigfoot, then look no further than this picturesque slot. Themed around the urban legend of a large extinct ape like creature hiding in deep in the Canadian wilds. Admittedly this slot hasn’t got the most impressive graphics but at gameplay isn’t too sinister with cartoonish animations and picturesque reels adorned with typical forest scenes, pine trees, open skies and free flowing rivers. The star himself may be the stuff of fantasy but this slot is alive with some fun low variance action. Although bonuses aren’t life changing this slot favours maximum entertainment over big wins.