Foxin’ Wins A Very Foxin’ Christmas – The Game at a Glance

A much beloved NextGen character, Christmas mood, and Super Bets across the reels! That is the fastest way to describe this entertaining 3D slot filled with random bonus rounds and multiplying free spins. Give it a free try down below!

Dare to play for real money? You’ll find the slot at NetBet Casino, our top choice for July 2021. 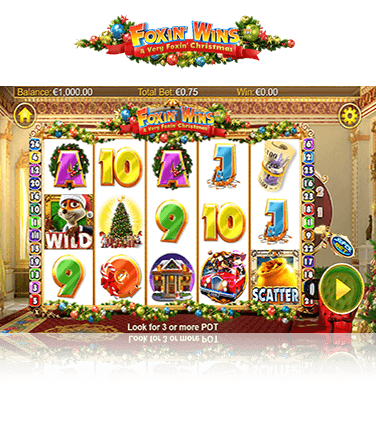 Foxin’ Wins A Very Foxin’ Christmas is set on a 5-reel layout with 3D graphics and 25 paylines. The game features the SuperBet option which increases your win potential by boosting the wagers. Тo adjust the additional bet, use the control right on the reels. The highest awarding symbol is the Fox which is also the Wild and substitutes for all symbols except Scatter. On the other hand, Scatter is the lowest paying symbol, but its secret power is activating the free spins round. It awards 10 free spins with a x2 multiplier with increased appearance of Wilds. The random bonus feature is a further treat on the reels. It can be awarded after any paid spin and grants an extra cash prize to your balance.

Video Preview of the Game in Action

Other variants of this slot

This slot is actually the Christmas edition and the third release of the NextGen Foxin’ series. If you’re interested in the other two variations, check out our Foxin’ Wins and Foxin’ Wins Again reviews where you can also play them for free. They all share the same SuperBet feature and have equal RTP, so I would say, it’s a matter of pretty much choosing between the original, the summer or the Christmas theme.

The lovely fox character has become a NextGen symbol for the well-know SuperBet feature. Depending on the level you choose to super bet, the game’s RTP varies between 95.22% and 95.6%. You can see that difference isn’t huge, however, playing with the SuperBet feature on is way more exciting and fulfilling. To be honest, even without it, the main game has good enough treats as well. It’s more than clear that 3D graphics and NextGen do miracles together, so graphically, there won’t be any disappointments. If you have any experience with Foxin’ Wins A Very Foxin’ Christmas, share them with our readers in the comments section below!