Medusa – Key Features that won’t Turn you to Stone

The female monster of Ancient Greek myth has been transformed into a thing of beauty in this well-known slot. A selection of bonuses can be played amongst a collection of mythological imagery. Experience the legend and play the game for free below.

Has the time come to play for real money? Go and visit 777 Casino, the popular choice for March 2021. 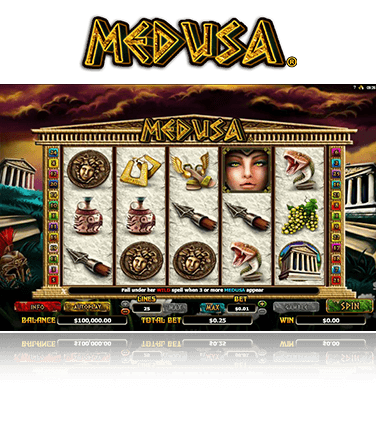 This mythological Video Slot from NextGen has 5 reels, 3 rows and 25 selectable paylines. Images recognisable from Ancient Greek history litter the screen. The title character herself is the Wild symbol, which can become stacked during the Turned to Stone Re-spins Bonus. 3 re-spins are triggered and all payouts are tripled. Wilds appear on reels 2, 3, and 4 only. Medusa awards 10 free games during the Once Bitten Bonus, occurring when 3 or more Scatter symbols appear. All winnings are doubled and the Soldier symbol grants extra Super Spins, played directly after the free games. All Super Spin prizes are multiplied by 5. The final bonus of the game is the Pegasus Bonus, represented by the mythological horse. Three Pegasus Symbols allows you to pick between them for an instant payout, along with extras of ‘Pick Again’ and ‘Win All’. During this bonus, you can win up to x50 of your bet.

Watch a Preview of the Game here

The popularity of this slot is nothing compared to its litter sister, Medusa II. Uncover 243 ways to win in locked reels, as well as soldiers attacking the famous female monster to claim extra prizes. While the amount of bonus games are few, your chances of winning will become the stuff of legend in this great addition to the series.

Ancient themes are always a hit in the slots and this one is no exception. The legendary story of this female monster is complimented well by colourful graphics that are beautifully composed. Sound-wise, you’re transported to mythological lands, but at times they can be a little overwhelming. If you’re expecting to win big during the game, you may be disappointed, but a lot of smaller payouts dot the reels. The plethora of bonus games make the slot exciting – even looking into the hypnotising green eyes of the Gorgon will be exhilarating! Have you taken on the legend of Medusa? We’d love to hear how you fared in the comments below.

77 Free Spins + £200 BonusOur casino suggestion for Medusa
Overall Rating 9.6/10.0 Play here!
Full T&Cs apply. • New players only • 100% up to £200 FreePlay (FP) • £20 min deposit, excluding deposits by Skrill or NETELLER • FP expires after 14 days and wins are capped at the amount of FreePlay received, exc. JP win • FP wins are credited as bonus • Bonus wins are capped at £500 • To withdraw bonus & related wins, wager 30 x (bonus amount) within 90 days • Wagering req. vary by game • This offer may not be combined with any other offer • Deposit balance is available for withdrawal at any time • Withdrawal restrictions apply
NextGenAll 111 NextGen slots at a glance
Popular Blog Posts
MicrogamingAll 408 Microgaming slots at a glance
NetEntAll 188 NetEnt slots at a glance
Home > NextGen > Medusa