Rage to Riches – Rage Against the Slot Machine

Has the stress of everyday life got you feeling down? Do you feel as though you aren’t getting the respect you deserve? If you found yourself saying yes over and over, check out what might be the most cathartic game ever released by Play’n GO. This slot will remind you why video slots are the future and why classic reels should remain things of the past. Blow off some steam in a free demo below.

Did you like making yuppies scurry? Then you can play for real money at BetVictor, the top casino for January 2021. 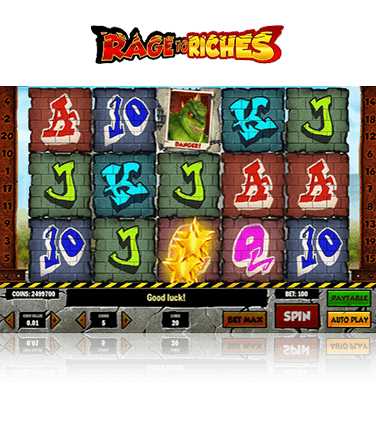 This Play’n GO slot has one of the most satisfying mini games we have played in a long time. This is where the ten to ace come into play. Every time the ten through ace appears on the slot from left to right, you collect one star; collect five and you activate the rampaging bonus game. In the bonus game, choose one of the three monsters to act as your avatar. In front of you are five buildings that award money when destroyed. Crumbling walls reveal the blow-drying blonde who you immediately eat. This will have you screaming, “nope, this time it was the beast killed the beauty.” Does the jewellery store remind you of your crippling loneliness? Destroy it! Does the hotel rub your lack of vacation time in your face? Destroy it! Does the Pizza shop only serve as a reminder of your terrible heartburn? Destroy It! You get the idea. Each successful demolition awards the player, but even if you don’t win big, we assure you it will be fun. Rage to Riches is a five-reel, three row video slot with cascading reels that cover 20 fixed paylines. After each win, symbols collapse to allow for another chance at winning. A score multiplier grows to a height of 5x after each win. The game has a total of ten symbols. The highest paying are the three monsters that appear in the bonus game. The lowest paying symbols are the much less inspired playing card symbols. Although those symbols are low paying, you’ll be thrilled when they appear on the board because they are the key to unlocking the bonus game. The game’s logo acts as a wild which replaces all symbols except the scatter, which is symbolized by a blow-drying “beauty.” Three scatter symbols will award ten free spins which can lead to some large sums of cash, but that isn’t the bonus we were after with this slot.

Feast Your Eyes on a Video Preview Below

If the bonus game found in Rage to Riches doesn’t give you enough to be excited about, Play’n GO was nice enough to give this game an RTP of 97.12%. This, plus the game’s interactive gameplay, is surely enough to hook even the pickiest of online gamers. We really appreciated the star meter that allowed us to see how close we were to the bonus game. Most other slots keep us guessing. The game’s retro electronic score feels straight out of an old arcade and creates a nice atmosphere to this destructive slot. The only real gripe that we had, was that the menus were hard to navigate. You have to click through the entire paytable to get back to the game matrix. Other than that, this game satisfied our appetite for destruction. Is this game too violent for you, or did you have a blast? Let us know in the comment section below.