Artificial intelligence is a concept that has both intrigued and terrified humanity for centuries and you don’t need to watch Westworld to imagine how wrong it could all go. This game features excellent graphics, which are helpful when the setting is a futuristic scrap yard world. Try our free demo below to watch the two tribes at war.

Fancy playing Robo Smash with higher stakes? You can play for real money at NetBet Casino, the top casino for April 2021. 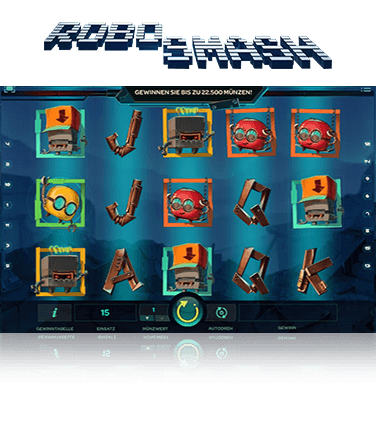 Real Money Casinos Where You Can Play Robo Smash

Robo Smash comprises of a five-reel, three-row structure with 15 fixed paylines. Five of the nine payout symbols in this game are cute, colourful robots, one of which is wearing a cardboard box as a hat. Robot fashion eh? Who knew! The other symbols are the classic playing cards Ace, King, Queen and Jack although in this interpretation they are fittingly made of scrap metal. There are two wilds in this game; robots from opposite sides. One is the smaller, rounder, purple robot wearing a helmet and the other is a cubic flying robot holding a W sign much like an L plate, perhaps he is learning to be wild? The wilds in this game will only appear in reels one and five and when one lands in the centre row it will expand to create a stacked wild reel. Should this occur in both reels one and five at the same time, the ROBO SMASH feature is triggered. This involves five free spins with a difference; with each spin the robots move in towards each other in preparation for battle. Any wins on spins two and four will be doubled and a win on the third spin will be tripled. With each spin the stacked wilds will move in a reel until they meet for battle, after a very quick display of fisticuffs, peace is slowly made as they retreat to their respective home reels.

iSoftbet first launched Robo Smash for Christmas 2016, featuring a snowy backdrop, decorations and music, before changing to a standard version in January 2017. While we are glad we won’t be getting Jingle Bells stuck in our heads in April, the new soundtrack isn’t much better. We had to turn off the repetitive and slightly annoying tunes, reminiscent of elevator music after a couple of minutes. The little extra touches in this game, with the symbols floating around in cyber-space and the special accessories that hint at the personalities of each robot make it worth sticking around to see the tribes do battle. The payouts aren’t huge but are nothing to be sneezed at either, with the multipliers in free spins making it all the more exciting. Have you played this dystopic slot game yet? Let us know your thoughts in the comments section below.