Second Strike – Much More than Meets the Eye

Quickspin calls this one its first ‘volatile’ 10-payline slot game. There is clear inspiration from classic fruit machines here, but a key game mechanic results in vastly different gameplay than you get down your local boozer. This game represents a lovely marriage between classic and contemporary slots action, and the soundtrack is mega – moving from soothing electronic synth funk to an upbeat 80s gameshow vibe when landing a large win. Play these reels for free in our demo below!

Play for real money at BGO, which is our top choice for playing this slot in May 2021. 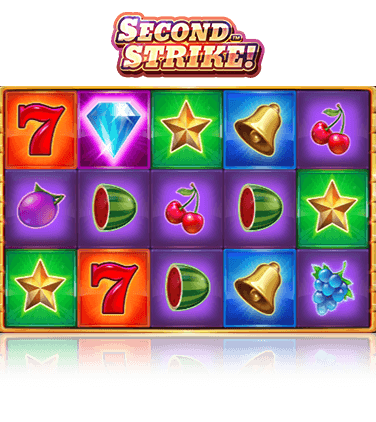 At first glance you’d be forgiven for thinking is any five-reel, three-row classic slot game. Take a closer look, though, and you’ll notice a border around the game containing symbols. This twist on the game format is known as the, wait for it, Second Strike feature! Any win will trigger this wheel of lights to start flashing. If the outer wheel marker lands on the symbol from any initiating line win, even more of that symbol will be added. Between six and ten symbols can be added to the game for additional wins depending on the length of the longest paying line of that symbol. For example, three of a kind leads to six extra symbols, four of a kind leads to extra symbols and five of a kind leads to 10 extra symbols. It sounds more complicated than it is, honestly, and the best way to get your head around how the feature works is to have a play of the game above until it all feels familiar. The Second Strike feature really adds to the excitement and turns what could have been a fairly dull fruit machine into something that is enjoyable.

Second Strike is a quintessentially Quickspinny game. The developers have taken a tired yet popular concept and given it a new lease on life. It’s quite an achievement that this online slot appeals equally to both old-timers and up and coming young whippersnappers looking for the next big thing. The gameplay is familiar yet new. Ok, so there’s no huge progressive jackpot or fancy bonus round, but the base game here is enough to keep players satisfied. Did we mention that the soundtrack is also banging? What do you think of this slot? Share your thoughts with us in the comment section!